Plant plastics reach for the stars 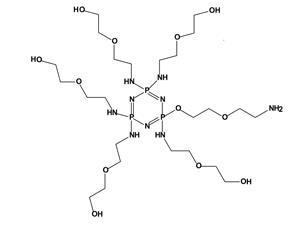 Researchers in Finland have transformed rice starch into a temporally stable, optically transparent, biodegradable plastic with a high degree of mechanical strength and good thermal resistance. This important step towards bioplastics made from simple and sustainable resources has potential applications in food packaging and biomedical materials.

A brittle polymer, starch can be treated with heat and water, via a technique called gelatisation, to make it suitable for traditional plastic processing techniques. However, films prepared by this method rapidly recrystalise and degrade, leaving them amorphous and brittle again. Many small molecules have been used as plasticisers that hydrogen bond with the glucose units in starch to prevent recrystallisation, however they are prone to migration and leeching, again degrading over time. Unfortunately larger compounds are typically less effective plasticisers.

Virginia Nykänen and colleagues at Aalto University have devised a creative solution to this problem. They used a star-shaped molecule called AEEP (aminoethoxy ethanol substituted phosphazene), the arms of which act as dynamic and mobile hydrogen bonding plasticiser molecules while being connected to a central core, effectively preventing its migration and leeching from the resulting plastic. This material succeeds where both large and small molecules have failed, the net result being a clear biodegradable plastic with desirable mechanical properties, manufactured from a sustainable and natural resource. 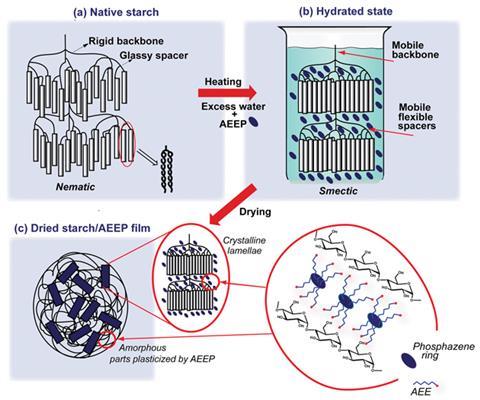 ‘By producing new bioplastics we can provide more options and increase their application,’ says Nykänen. ‘Decreasing the production of non-degradable waste and using bioplastics instead will certainly benefit the environment in the middle term.’

‘Starch has largely been overlooked as a building block,’ comments Andy Abbott, a sustainable materials expert at the University of Leicester, UK. ‘Importantly, in this study, the thermoplastic properties appear to be retained over a time-scale of several months which has been an issue with other starch-based plastics.’

Nykänen and co-workers are now testing AEEP within a range of biopolymers, in addition to investigating the self-healing properties of their starch-based plastic.