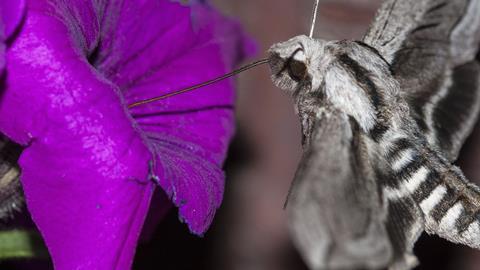 It seems that plants actively emit their fragrances and whiffs thanks to transporter proteins inside plant cells rather than just release them passively. The discovery means that plants use energy to smell the way they do and offers new insight into the importance of plant communication.

Plants make and emit many volatile organic compounds (VOCs) which are responsible for their scents and odours. VOCs play vital roles as communication molecules for various functions including attracting pollinators and deterring herbivores. But while VOC biosynthesis is well understood, knowing how VOCs get out of cells has remained, at best, an assumption.

‘It has been widely stated throughout the literature that VOCs freely diffuse out of cells once they are synthesised,’ says author Joshua Widhalm at Purdue University, US. ‘I think this assumption was based on the fact that up until now most work on VOC release has focused on small molecules like isoprene for which diffusivity is high enough to sustain emission.’

However, in 2015, Widhalm and his colleagues started to doubt this assumption. Using mathematical models, they calculated that the concentration gradients necessary for most VOCs to diffuse passively would require VOCs to accumulate in cell membranes at levels toxic to the plant.2 This led them to speculate that a biological mechanism must be at work. Now, the team’s hunch has been vindicated with the discovery that VOCs emissions in petunias relies on a specific protein that mediates active transport – a process that requires energy to move molecules against a concentration gradient.

‘This discovery really tells us a lot about the importance of volatiles in a plant’s life. Plants already spend a lot of resources on the production of volatiles, now we know they spend even more energy, namely for transportation in addition to biosynthesis,’ comments Franziska Eberl, who studies plant volatile emission at the Max Plank Institute for Chemical Ecology, Germany. ‘Comparing volatile emission with human languages, we might understand why it is so important for them: it is how plants communicate with their environment.’

As easy as ABC

The team investigated Petunia hybrida flowers, which are known to emit high levels of benzenoid and phenylpropanoid volatiles. Since some non-volatile compounds are known to be transported by membrane proteins called ABC transporters, the team reasoned that these proteins might also traffic VOCs. By searching petunia petal RNA libraries the team found a gene that encodes an ABC transporter called PhABCG1 that is expressed almost exclusively in petals of open flowers.

To determine whether PhABCG1 was involved with VOC emissions, the team created transgenic petunias in which the expression of PhABCG1 was disrupted. They subsequently observed a drop in VOC emission and saw that VOCs accumulated inside cells. ‘Using different cell staining techniques and microscopy, we were able to show that the accumulation of these compounds inside the cell caused a disruption of the plasma membrane as previously hypothesised,’ explains Funmilayo Adebesin, first author of the study.

Since VOCs must cross the plasma membane to get out of the cell regardless of tissue type, Widhalm is confident that the active transport mechanism applies to other plants. ‘VOCs must still cross the same subcellular barriers as those in a petunia petal epidermal cell. Thus, it seems reasonable to predict that plants, and perhaps even organisms in other kingdoms of life, also contain transporters involved in trafficking VOCs out of cells.’

‘The effects demonstrated in this work are likely to represent problems faced by all plants in the biosynthesis, storage and release of many VOCs in both flowers and leaves, and so it is very likely that this represents a widespread mechanism,’ says Meredith Schuman, who investigates plant gene function at the Max Plank Institute for Chemical Ecology, Germany. ‘It points to a new and exciting avenue of investigation for understanding how plants regulate their VOC emission in order to orchestrate myriad ecological interactions.’