Researchers in Australia have developed a plasma treatment that can make any medical device biocompatible by sticking a patient’s own proteins to it. They hope the treatment could be used on biomedical devices, such as stents and hip replacements.

Biocompatibility is a serious issue when developing biomedical devices. If a device isn’t compatible, it can cause inflammation, excessive tissue regrowth, or even be outright rejection. 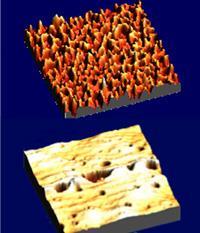 The answer is to coat the surface of the device with a protein that is compatible with the body. Two methods have been developed to do this. One attaches proteins using van der Waals forces that exist between neighbouring molecules. However, this can cause the protein to fold in an unnatural way, changing its function. Another method is to attach intermediary ’linker’ molecules between the surface and the protein. However, this approach is complicated, time consuming and only works with surfaces that can be connected to the linker.

Marcela Bilek and colleagues at the University of Sydney in New South Wales have developed a technique that they hope will work for all surfaces. The team used an electric field to accelerate ions from a plasma onto a device’s surface. If the device already had a polymer surface, then the researchers use only non-reactive atoms, such as argon. If the device had a non-polymer surface, on the other hand, the researchers inserted a carbon-containing gas into the plasma, which deposits a polymer-like film onto the surface as a precursor.

As the ions hit the surface they produce lots of free radicals. These oxidise on the surface, creating carbon-oxygen groups, which are polar and, therefore, hydrophilic or water-loving. This means proteins, which are stabilised by a water environment, can sit on the device’s surface in their native folded state.

Bilek’s group examined blot clots that formed as blood flowed over a treated stainless-steel surface compared with an untreated one. ’The treated surface [was] covered with a covalently bound layer of protein from the blood plasma, which inhibited the adhesion of platelets and the formation of clots,’ Bilek says. Clotting was ’dramatically reduced’ as a consequence.

Hanshan Dong, an expert in plasma treatments at the University of Birmingham, UK, is impressed by the group’s finding that radicals from beneath the treated surfaces immobilise proteins. ’My only concern is that some researchers have found that radicals would cause oxidative embrittlement and reduced fatigue life of some bulk polymeric materials,’ he adds.