Researchers in the US and Germany have used a plasmon ruler to show in principle how to measure the three dimensional position of objects at the nano-scale. The ruler, which consists of a stack of gold nano-rods, could one day be used to improve understanding of soft matter processes, such as protein folding. 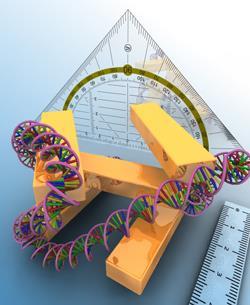 Plasmon rulers consist of metal nanoparticles that are attached to biomolecules. Like tiny antennae, the nanoparticles create plasmon resonances - waves of electrons - that absorb or scatter light at specific visible or infrared frequencies. Because the exact frequency depends on the proximity of other particles, the nanoparticles offer a way to measure inter-particle distance.

In the past, such distance measuring has been limited to one dimension, which has generally ruled out determining the relative orientation of the particles. But now Paul Alivisatos and Na Liu of the University of California at Berkeley, US, together with colleagues at the University of Stuttgart in Germany, have found a way to explore the other two dimensions. ’Compared with 1D plasmon rulers, our 3D plasmon ruler offers additional degrees of freedom, such as rotating, twisting, tilting and any conformational changes,’ says Liu.

The researchers created their plasmon ruler from five gold rods, each less than 350 nm long, in an ’H’ arrangement, with one horizontal rod sandwiched between two vertical rods at either end. They used electron-beam lithography to create several such arrangements, subtly varying the position of the central, horizontal rod in each one. By examining the energy of the resonance dips in the transmission spectrum, the researchers found they could determine this central-rod position with accuracy.

’I’d say this takes the plasmon ruler concept - which [Alivisatos and his group] have helped pioneer - to a new level of sophistication and complexity,’ says David Ginger, a chemist at the University of Washington in Seattle, US, who has worked with plasmon rulers. Ginger says there will be hurdles for practical applications, such as incorporating the rulers into biochemical systems, something the authors also point out. But he adds that this is ’within reach and, in the long term, variations of this approach are likely going to find many applications.’

Liu says that one application of 3D plasmon rulers could be understanding why proteins fold in a certain way - an important topic in biology because incorrectly folded proteins are linked to diseases like Alzheimer’s and Parkinson’s disease.