Despite the rise in plastic production, the amount of debris in the ocean may not be increasing

Plastic waste is a problem in the oceans, but it’s not clear where it is - or how much there is. Kara Lavender Law and colleagues at the Sea Education Association in Woods Hole, Massachusetts, US, have been trying to pin down where plastic debris accumulates in the Atlantic, and were surprised to find that, despite the rise in plastic production, the amount of debris in the ocean hasn’t really increased. 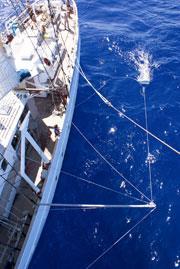 Fishing for plastic in the North Atlantic subtropical gyre

Law’s team sampled the sea surface for biological organisms twice a day using a plankton net, about a metre wide at the mouth, and with a mesh size of about 0.33mm. ’As early as the late 1970s, we noticed that we were collecting tiny bits of plastic,’ says Law. The team has now analysed data from the past 22 years - more than 6,000 net tows- to try and quantify the amount of plastic in the western Atlantic and the Caribbean.

’Surface currents transport the debris around the ocean, and the highest concentrations of plastics were found in subtropical latitudes where the currents come together. We’re not sure yet how far east it goes as we’ve only studied up to just east of Bermuda,’ she says. The fragments of plastic are mostly HDPE, LDPE and polypropylene, which are less dense than seawater - denser plastics like PET will sink.

Perhaps the most surprising result, she says, is that they didn’t see an increase in debris over time. ’Global plastic production has increased rapidly, and while we don’t have any direct measure of the amount of plastic entering the ocean, there is a strong inference it has increased,’ she says. ’It’s possible some is broken down into even smaller pieces that were not captured by the net, and organisms growing on the debris will increase its density and cause it to sink. Microbes have been known to adapt to available food sources, and this summer we collected samples to try and identify whether there’s some class of organism that’s taking advantage of the plastic as a food supply.’

’This is a very interesting study, [but] while this paper clearly shows no consistent trend in the abundance of debris near the sea surface in the north Atlantic, we should not extrapolate this to other regions or habitats,’ says Richard Thompson of the University of Plymouth, who has studied plastic debris in the north Atlantic. ’There are reports of plastic accumulating in remote regions, including the Antarctic, and in substantial quantities in the deep sea. We need more work to establish rates of accumulation in remote regions and, in particular, rates of accumulation of very small microscopic fragments. Meanwhile, we all need to work much harder to dispose of plastics properly.’