Pointing the tools of atmospheric chemistry inside

It’s estimated that people spend up to 90% of their time indoors, where the concentrations of some pollutants can be up to 10 times higher than levels typically found outside. But only in the last few years has the advanced instrumentation of atmospheric chemistry been brought to bear on inside environments.

Atmospheric researchers at the University of Colorado Boulder (CU Boulder) are engaged in this very task, turning their expertise and state-of-the-art air monitoring equipment inward to examine their institution’s own indoor spaces. After studying the air in a classroom and then a museum on campus, the scientists moved on to a student athletic centre and have made some fascinating discoveries. 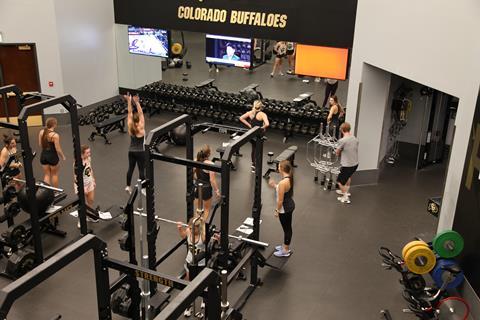 University of Colorado Boulder cheerleaders working out in the Dal Ward Athletic Center, whilst scientists monitor the environment with a suite of air-sampling equipment

A few months ago the researchers – led by Zachary Finewax, a scientist at CU Boulder’s Cooperative Institute for Research in Environmental Sciences (Cires) – were the first to observe N-chloraldimines in the air. These compounds – a reaction product of bleach with amino acids – were detected in the campus gym. They had previously only been identified in wastewater and water treatment plants.

It was a massive collaboration to get all of these instruments in, and took a lot of planning

The discovery, reported in December 2020, came out of a three-week long research campaign in November 2018. The CU Boulder team worked with partners inside and outside the university to fit the student gym with state-of-the-art air-sampling tools to measure several airborne chemicals in real time before, during and after workouts.

‘We had seen in our past studies a certain amount of volatile organic compounds (VOCs) and carbon dioxide being emitted by people indoors, and we wanted to see how exercise impacted that since all previous studies at high time resolution had been done while people were at rest,’ Finewax explains.

The equipment for the project, dubbed Athletic, came mostly from the labs of three different research groups at CU Boulder. This included multiple mass spectrometers for measuring the gas phase, the centrepiece of which was the Vocus – a proton transfer reaction time-of-flight mass spectrometer that offered sensitive detection of VOCs in real-time.

Collaborators at Aerodyne Research – a company based in Massachusetts that makes advanced instrumentation for atmospheric measurements – also provided an electron ionisation time of flight mass spectrometer and a brand new gas chromatograph with an in situ pre-concentration system that made it sensitive enough to do trace gas measurements. That piece of equipment was joined to another mass spectrometer and also coupled to the Vocus to increase its sensitivity and separate isomers.

It took about two days to get everything moved into the gym and up and running. ‘This is the first time a suite of instruments like this was employed to look at an indoor air setting,’ Finewax says, noting that most of this gear is capable of one-second time resolution. Previous indoor air work in gyms had been done with one-hour to 24-hour resolution measurements, which doesn’t allow scientists to see what specific activities are causing which chemical signals, he says.

During the study, there were anywhere from seven to 35 athletes exercising at any given time in the gym, which has six-metre tall ceilings and a small balcony where all the instrumentation was located. The researchers sampled both the room air and the supply air, and they took measurements that switched between the two every five to 10 minutes.

‘This allowed us to determine what emissions were actually coming from people exercising or cleaning, or any other activities that may have been in the room, because we could separate it from the emissions coming from outdoor air or ventilation within the building,’ Finewax recalls.

The study confirmed that the amount of organic compounds that people emit – whether from their breath or their sweat – depends on their metabolic rate. A person releases a lot more of these substances while working out than at rest. For example, Finewax says past research showed that people at rest emit 20 to 30 grams of carbon dioxide each hour, but that figure was closer to 100 for exercisers in the Athletic study.

Many VOC emissions were also elevated and correlated with carbon dioxide emissions, which Finewax and his team also attributed to exercising. Meanwhile, the VOCs emitted through use of personal care products, like deodorants and perfumes, were not elevated in the exercisers.

The gym study also clarified the impact of bleach cleaners on indoor environments. They effectively kill surface bacteria, but were seen to combine with other bodily emissions of exercisers to form N-chloraldimines, whose toxicity in unknown. ‘There is no toxicological data, so it we are not entirely clear whether these compounds are harmful or not,’ Finewax says. But, chemically similar reaction products of ammonia with bleach have been shown to damage human health. 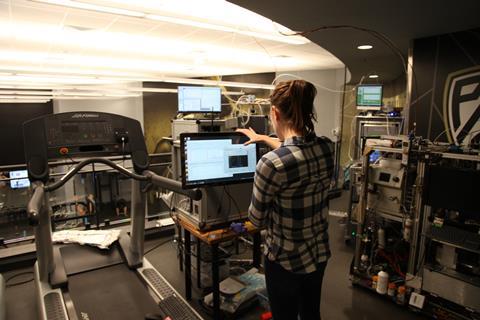 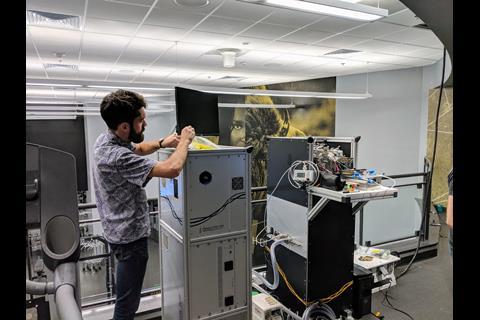 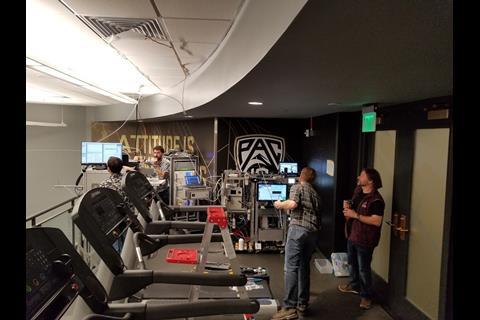 About 15 researchers were involved in the Athletic study. Finewax brought together all the data to interpret and analyse it, but responsibility to collect and process the data was spread out for all the instruments used. For example, Cires postdoctoral researcher Demetrios Pagonis and Aerodyne principal scientist Megan Claflin helped to set up and maintain instruments like the field-deployable gas chromatograph.

‘It was a massive collaboration to get all of these instruments in, and took a lot of planning,’ Claflin says. ‘Then, once the instruments were installed, there was also a ton of teamwork to make sure that they were all running as best they could.’ Team members relied on each other to weave the various measurements together into a coherent story, explains Claflin, who earned her chemistry PhD at CU Boulder in July 2018 – just six months before the Athletic study began.

Claflin had worked closely with many researchers participating in the project while at the university, including Pagonis. At Aerodyne, she was developing the new gas chromatograph, and the Athletic study allowed her to deploy the prototype for the first time.

Atmospheric chemistry requires a big team effort because it quantifies a range of chemicals to understand the air in a building or particular city. Despite sharing the same instrumentation, outdoor and indoor air chemistry are very different. Inside light is around one thousandth to one hundredth the intensity of outside light. ‘Outdoors, most of the chemistry that occurs is driven by photochemical reactions, which drive the production of radicals that then go through these oxidation reactions with VOCs,’ Claflin explains. By comparison, such photochemistry is either negligible or severely depleted indoors because of the lack of natural light.

In addition, inside surfaces like walls, floors, fabrics and even people participate in chemistry. The VOCs and particles deposit on these surfaces and interact with them, undergoing reactions that wouldn’t happen outside.

Differences aside, the two realms are deeply connected. Indoor emissions will make their way outdoors where they may be processed further, and compounds from outside can enter inside spaces where they undergo surface reactions.

Chemical emissions inside are more concentrated due to dramatically less ventilation, so things don’t dilute as quickly. That is why, for example, public health experts warn that indoor gatherings facilitate the spread of Covid-19.

The researchers that were part of the Athletic study, which was done pre-pandemic, say their work is even more important as scientists try to determine how best to keep people safe from the virus. Indoor cleaning has dramatically increased amid Covid-19, and the Boulder scientists suggest it is important to investigate the possibility that excess bleach use might pose its own risks.