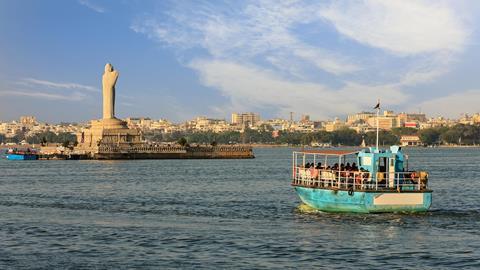 Effluent from Indian pharmaceutical firms contains high levels of antibiotics, and is contributing to the growth and spread of multi-drug resistant (MDR) bacteria.

A team led by Christoph Lübbert from Leipzig University Hospital, Germany, analysed antibiotic pollution in Hyderabad, where 30% of India’s drug exports are manufactured. The researchers collected water samples close to bulk drug manufacturing facilities in and around the Patancheru–Bollaram industrial zone on the city’s outskirts; near two sewage treatment plants; and from the Musi River and habitats within Hyderabad and nearby villages.1

‘The pharmaceutical industry has argued that it has improved production processes,’ says Lübbert. ‘Last year, India’s Supreme Court even ordered the country’s pharmaceutical companies to operate a “zero liquid discharge” policy. We wanted to find out whether the situation has really changed or if there are still problems.’

The researchers analysed samples for 25 different antibiotic and antifungal pharmaceuticals using liquid chromatography–tandem mass spectrometry. They also looked for MDR pathogens, particularly those resistant to carbapenem-class antibiotics (often the drugs of last resort when treating resistant infections) and non-fermenters (Gram-negative species that cannot break down glucose, and which are significant reservoirs and vectors for resistance genes). Almost all the samples contained bacteria resistant to multiple drugs, and many were contaminated with ‘excessively high concentrations’ of antibiotics and antifungals. One sewage sample from the Patancheru–Bollaram industrial zone contained 237mg/l of the antifungal fluconazole – more than 20 times the therapeutic level in blood. ‘To our knowledge, this is the highest concentration of any drug ever measured in the environment,’ says Lübbert.

Antimicrobial pollution is not a new issue.2 ‘Pharmaceuticals in the environment are a global challenge, but India has become a hotspot for this particular problem,’ Lübbert adds. ‘Although pollution from bulk drug manufacturing is less widespread, discharges that promote development of drug-resistant microorganisms can still have global consequences.’ Transfer of genetic information between pathogens, and global transit of goods and people, mean resistance can spread quickly.

The Bulk Drug Manufacturers’ Association of India (BDMAI) recently commissioned its own study, performed by Siddavattam Dayananda from the University of Hyderabad.3 The study compared bacterial loads in water and soil samples from areas near to manufacturing plants and up to 50km away. The BDMAI then concluded that, because the drug-resistant bacterial content of the samples was broadly similar, there was ‘no clear evidence of selective enrichment of drug resistant bacteria’ around Hyderabad’s pharmaceutical manufacturing clusters.

Lübbert points out several significant flaws in the BDMAI analysis, and calls the conclusions ‘questionable’ and inaccurate. ‘The study only shows that there are a lot of resistant pathogens in and around Hyderabad,’ he says.

While Dayananda stands by his study, he agrees that antimicrobial resistance poses a significant threat. ‘It doesn’t mean I support poor water treatment and release of waste into streams. That is highly unethical and irresponsible.’ As well as improving effluent treatment from manufacturers and eliminating environmental discharges, he highlights the need to restrict sales of antibiotics without a doctor’s prescription, and to improve waste disposal systems in hospitals. ‘In my opinion that is the biggest source of developing resistant pathogens,’ he says.