A polymer-based device that can walk caterpillar-like across a surface has been developed by researchers in China.

The marching machine, which steps out in response to swings in humidity, was made by Junqi Sun and colleagues at Jilin University in Chanchun. The device is based on a water-absorbing hydrogel polymer film, which is tightly bonded to a flexible humidity-inert polymer support. 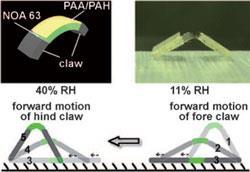 The hydrogel layer absorbs water and expands in response to rising humidity, while the underlying support remains unchanged. This mismatch means the two layers bend as the hydrogel expands, and then relaxes as the humidity falls. The researchers controlled the humidity by alternately blowing dry and then moist nitrogen over the film, causing the relative humidity to swing from 11 to 40 per cent. By attaching ’claws’ to each end of the bilayer, and standing it on a rough surface, the bilayer can walk in a single predetermined direction when subjected to humidity swings, while carrying a load up to 120 times its weight.

A particular set of properties are needed for the hydrogel to form a powerful actuator, says Sun. It must retain its stiffness when swollen with water, have a high rate of moisture expansion, and rapidly absorb and desorb water. To achieve this, Sun used a polyelectrolyte multilayer (PEM) film, which is made from alternating layers of oppositely charged polymers. ’We believe that many PEM films can be used to fabricate powerful actuators because the layer-by-layer assembly enables precise control of compositions, structures and properties of PEM films,’ Sun says.

While such stimuli-responsive materials have been seen before, ’the neat thing here is that they have built it into a cool-looking device - it sparks the imagination as to what you could actually do with it,’ says Geoffrey Spinks, who researches polymer-based actuators and sensors at the Intelligent Polymer Research Institute at Wollongong University, Australia.

Spinks says that, because humidity is relatively hard to control, it would be difficult to use the actuator for any practical applications, unless it was being used as some sort of humidity switch. ’But maybe you could tune it to absorb other chemical vapours,’ he adds.

However, Sun is already looking for alternative ways to drive the device. ’We believe that PEM film-based walking devices driven by other stimuli, such as light, temperature and so forth, can be fabricated,’ Sun says. ’IR irradiation can induce the evaporation of adsorbed water in PAA [polyacrylamide]/PAH [poly(allylamine hydrochloride)] film, and therefore, shrinking of PAA/PAH film,’ he says.