Mapping the temperature differences in different portions of living cells is now possible thanks to a fluorescent polymer thermometer developed by Japanese scientists. It shows that some organelles within cells are warmer than others, and could help understand how cells regulate their temperature and how this correlates with disease.

In 2009, Seiichi Uchiyama and his team from the University of Tokyo developed a fluorescent polymer that could determine the average temperature of whole cells. But to see what was going on at a sub-cellular level meant redesigning the whole system. 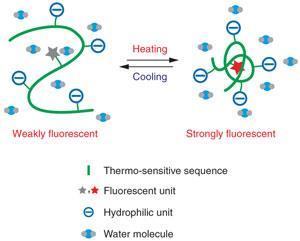 The polymer (green) contracts on heating and squeezes out water, which activates the fluorescence

Uchiyama explains that the previous polymer that took a cell’s temperature tended to aggregate, rather than dispersing itself throughout the cell. ’We improved the solubility of the thermometer by making it more hydrophilic,’ he says. ’In addition, the resultant thermometer was small enough to enter the nucleus.’

The thermometer works by incorporating three elements into a copolymer: a fluorescent molecule, hydrophilic groups and a heat-responsive portion. The fluorescence is quenched by water, but as the polymer contracts in response to increased temperature, the water is displaced and the fluorescence response increases. A key modification for mapping temperature in different parts of a cell, says Uchiyama, was switching from measuring the fluorescence intensity to fluorescence lifetime. 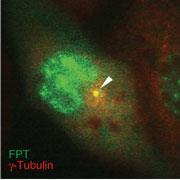 The centrosome (arrow), which controls cell division, was warmer than surrounding parts of the cell

’In intracellular temperature mapping, we can never determine the exact concentration of the fluorescent thermometer in different areas,’ he points out. ’So fluorescence intensity becomes useless because it also varies depending on the concentration.’ By carefully selecting the fluorophore they used, the team managed to develop a thermometer that was not affected by other parameters that can influence fluorescence lifetime measurements, such as pH, ionic strength, viscosity and the presence of protein.

To test the new thermometer, the team injected it into live cells. The nucleus, centrosome and mitochondria showed up hotter than the surrounding areas, and the temperature profile changed measurably during different parts of the cells’ lifecycle. Uchiyama suspects that this correlates with the fundamental cellular processes in these areas - for example the metabolic processes in the mitochondria that supply the cell with energy.

The excellent temperature resolution of the polymer is just as important as spatial resolution, says Anita Jones from the University of Edinburgh, UK. ’To look at biologically interesting things it’s necessary to resolve temperature changes of less than one degree,’ she adds. And while microscopes that can measure fluorescence lifetime are not quite as widespread as those for fluorescence intensity, a lot of modern microscopes are equipped for lifetime measurement, so the technique should be easily accessible to researchers.