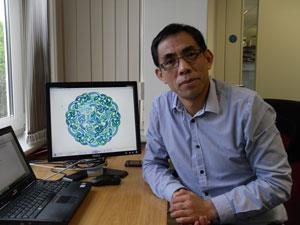 Wenxin Wang's polymer can tie itself up in a celtic knot

Celtic knots and ancient art have inspired a new way of synthesising polymers. The slow-motion method of controlling polymer growth produces a single chain that when linked repeatedly, intricately wraps around itself to form a dense structure.1

Scientists at the University of Ireland, Galway, say their new process offers potential in areas including medical devices, drug delivery, elastics and adhesives. ‘Our polymerisation is slow, so that monomers are added almost one by one into a polymer; that is really new,’ lead author Wenxin Wang tells Chemistry World.

Deactivation enhanced ATRP, as the name suggests, holds the catalyst primarily in a deactivated state. In contrast to normal radical polymerisation reactions, where many hundreds of monomers are added to a growing chain in a single active cycle, this polymerisation approach severely restricts the addition of monomers to the chain. This allows great control over the reaction, allowing it to be tailored to produce two distinctly different structures.

The first is a hyperbranched polymer and the second is a single chain that does not link to other chains. Instead, the second structure only links to itself, like a single piece of string knotted together.

‘Instead of nano- or microgels which are usually formed by chain growth polymerisation of divinyl monomers, a soluble, highly branched polymer topology is achieved by controlling the kinetic chain length,’ says Brigitte Voit, a polymer chemist at the Leibniz Institute of Polymer Research in Dresden, Germany. ‘Similar polymer topologies have been so far available only for step growth polymers like polyesters.’ These involve special monomers which have to be synthesised, ‘whereas here commercially available divinyl monomers can been used’.

Wang says the versatility of the synthesis process will allow them to simply tailor polymer properties, such as structure, functionality and strength. ‘For now we are using this approach to produce polymers for wound adhesives,’ explains Wang. ‘We can use this polymer to seal the wound, so you don’t need a suture the wound.’ The scientists add that it also has the advantage that production can be scaled-up, a broad range of monomers are available and significant functionality remains within the polymer structure.

David Haddleton, a polymer scientist at Warwick University, UK, says the new paper builds on a previous study.2 This showed that the use of highly efficient cobalt(II) chain transfer agents can permit highly branched polymers from homopolymerisation of di- and even tri-functional vinyl monomers to be made in an approach that uses conventional free radicals, he says.