A continuous process for converting waste polystyrene back to styrene monomer has been developed by US chemists. The process could help polystyrene recycling become more economical by recycling it into high quality new materials, rather than simply melting and remoulding contaminated plastics into low value goods.

‘We recycle less than half of our plastic waste in the US, and worldwide probably a lot less. Mostly we put it in landfill or burn it,’ says Lanny Schmidt from the University of Minnesota in Minneapolis, who led the team. He adds that most recycled plastic has to be sorted from general municipal waste and ends up in low value products like fence panels because it is often mixed with other materials or contaminated. ‘It’s too expensive to clean it up and turn it into something useful,’ he says.

Simply melting plastic waste and remoulding it can be messy and cause the plastic to decompose, char and give off noxious gases, says Schmidt. His team wanted to develop ways of converting it back to the original monomer, which could then be reprocessed into virgin plastic or other products. Various other groups had shown it was possible to get batches of polystyrene to depolymerise, but to make it more economically viable, it needed to be a continuous process. 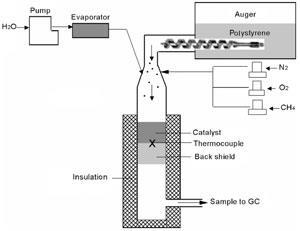 The reactor can continuously pyrolyse polystyrene into styrene monomer

Schmidt’s process uses a platinum or rhodium catalyst combined with cerium and supported on alumina spheres. As ground up particles of polystyrene are continuously fed into the reactor, they come into contact with the hot catalyst and pyrolyse into styrene, which can be removed as a gaseous stream. The heat given off by the reaction maintains the temperature of the reactor, which helps to reduce running costs as no extra heat input is required.

There are lots of potential products of polystyrene pyrolysis that could contaminate the product stream including benzene, toluene, ethylbenzene, or small fragments of the polymer. ‘To our surprise we got up to 80% styrene monomer,’ Schmidt says, adding that the lab-scale reactor using 1g of catalyst can process around 1kg of polystyrene a day, and could be scaled up enough to deal with local reprocessing of polystyrene waste.

However, Martin Olazar from the University of the Basque Country in Bilbao, Spain, says that while the yield of styrene is very high, ‘this is at the expense of feeding H2 [into the reactor as a sacrificial fuel] and using noble metal catalysts, which make the process rather expensive.’

Schmidt agrees that there are multiple factors that determine whether such a process will be economically viable. For example, the problems of sorting, cleaning and transporting plastic waste will have to be overcome to make recycling truly competitive. There are also lots of other plastics that will not pyrolyse back to their monomers. ‘Polyethylene, for example, makes a whole mixture of low molecular weight molecules, nothing like a stream of pure ethylene.’