Possible origin of chirality in the RNA world

Given a tiny push one way or the other, simple racemic precursors can lead to the chiral building blocks of RNA using a combination of chemical and physical factors. The work brings together a possible explanation of how life began on Earth with its preference for L-amino acids and D-sugars, say US researchers.

Donna Blackmond and her team from the Scripps Research Institute in La Jolla, US, found that by combining racemic glyceraldehyde (in which there are equal numbers of left and right-handed enantiomers) with 2-amino-oxazole in the presence of the amino acid proline they could make crystals of RNA precursors that were enantiomerically pure - all the same handedness. 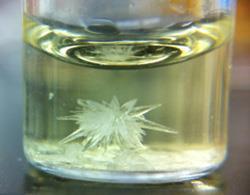 The work combines previous research from Blackmond’s own group with that of a team led by John Sutherland from the Laboratory for Molecular Biology in Cambridge, UK, and Jack Szostak at the Howard Hughes Medical institute in Boston, US. That team had shown that these simple molecules could give a feasible route to RNA building blocks. ’But those reactions were all racemic,’ says Blackmond.

To see if they could introduce chirality, Blackmond’s team added each of the protein-forming amino acids into the mix, initially as the single enantiomers found in modern biology. Several of these molecules led to products where there was an enantiomeric excess - more of one enantiomer than the other - but proline was by far the most effective.

The process works by a combination of chemical amplification and the fact that crystallising mixtures above a certain enantiomeric excess favours crystals of the same enantiomer. ’That takes away the difficult part of how we get all the way to homochirality,’ says Blackmond. ’The chemistry can bump things up enough, then as it goes on it just gets better and better.’

It turns out that proline reacts preferentially glyceraldehyde and the oxazole to form a product where all three are coupled together, but depending on the stereochemistry the rates of the reactions are different. This eliminates the ’wrong’ enantiomer of the glyceraldehyde from the reaction, leaving behind and enriching the ’right’ enantiomer, which can react with the oxazole to form Sutherland’s RNA precursors. 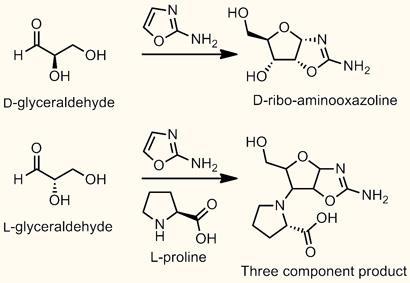 The combination of sugars and amino acids also matches modern biological systems. Starting with a slight excess of L-proline, you enrich the D-sugars. ’But if you start with one per cent excess of the D-amino acid it goes the other way,’ says Blackmond. Her theory is that these tiny imbalances could have occurred randomly either way, before one finally reached the critical point and won out.

’This is a very important step on the path to understanding the prebiotic origin of chirally pure nucleotides,’ comments Szostak. However, he points out that, because of the sacrificial three-component reaction, it takes large amounts of proline and glyceraldehyde to make rather small amounts of pure product. ’Despite the fact that the overall process is inefficient,’ he adds, ’it is nevertheless the first hint at how this important process might happen.’ But Blackmond counters that the prebiotic world didn’t necessarily need to be efficient. ’It just needed to get to the point where it’s self-sustaining, and that’s where the physical amplification comes into its own.’

Once that critical point is reached, Szostak and Blackmond agree that life becomes a much easier prospect. ’Once one has RNA made from chirally pure building blocks, evolution of ribozymes that catalyze metabolic reactions can begin inside primitive cells,’ Szostak says. RNA can then control chirality as it produces other molecules, ’and then you’re off and running,’ says Blackmond.