A simple technique that nests a series of reaction vessels like Russian matryoshka dolls could help chemists avoid the tedium and expense of purifying organic compounds after each step of a long synthesis.

’One pot’ synthesis - where all the reagents and catalysts needed for a series of reactions are mixed in a single vessel - is becoming increasingly popular with organic chemists. But these cascades only work if all the reagents needed for each step are compatible, a tall order when sensitive metal catalysts are required to cohabit with harsh oxidants.

Martin Mwangi, a grad student at the University of Iowa, Iowa City, has a deceptively simple solution to the problem. Along with his supervisor, Ned Bowden, and postdoc Brett Runge, Mwangi has created small thimbles from semi-permeable polydimethyl siloxane (PDMS), which can fit inside larger flasks. The thimble contains all the chemicals necessary for the first stage of a reaction sequence, yet allows only the organic product of the reaction to seep through the PDMS walls into the larger flask. 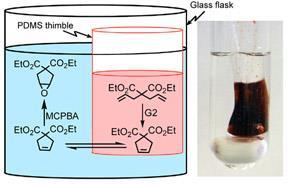 A Grubbs’ catalyst is trapped in a thimble, while the product of a metathesis reaction is oxidised outside

That means sensitive and expensive catalysts can be retained in the thimble, while the organic molecules undergo a second reaction on the other side of the thimble wall. Mwangi presented the technique at the American Chemical Society spring conference in New Orleans, US, on 9 April.

To prove the concept, the team carried out a metathesis reaction inside the thimble, joining two alkene groups together using a Grubbs’ ruthenium catalyst. Once the alkene product had seeped into the outer vessel it was then converted into an epoxide by meta-chloroperoxybenzoic acid, an oxidising agent that is incompatible with the ruthenium catalyst.

More than 99.5 per cent of the catalyst remained inside the thimble after 16 hours, and could be recycled many times without losing its activity.

In another example, the team ran an aqueous reaction inside the thimble before using an extremely water-sensitive magnesium-based Grignard reagent on the outside [1].

’It’s a very original idea,’ says Arlene Roland, a medicinal chemist based in Montpellier, France, with pharmaceutical company Idenix. ’I think I’ll try it out myself.’ She points out that any trace of a metal catalyst can render an organic compound useless for medicinal chemists, so the purification process inherent in the method could be particularly useful.

The thimbles are easy to make, says Mwangi, and cost mere pennies. The team are now extending the technique by nesting three of the thimbles inside each other to run even longer sequences of reactions; and by putting two separate thimbles inside the same vessel so that two reaction products can combine to make a third.