Electric car maker Tesla recently paid over $200 million for a US supercapacitor manufacturer Maxwell Technologies. Applications of supercapacitors (also called ultracapacitors) have grown in the last two decades as the technology has matured, and look set to play a significant role in the future of electric vehicles and grid-level power storage, among other areas.

In vehicles, supercapacitors are predominantly used for regenerative braking. Supercapacitors have much higher power densities than batteries – they can charge and discharge more rapidly. They also store much more charge than traditional electrolytic capacitors, albeit at significantly lower voltage. That makes them more suitable for capturing kinetic energy as a vehicles slows and releasing it for bursts of acceleration. ‘They don’t have the ability to store large amounts of energy, but they are high powered devices, primarily because the electrons can transition back and forth very quickly,’ explains Priya Bendale, materials scientist at Maxwell. 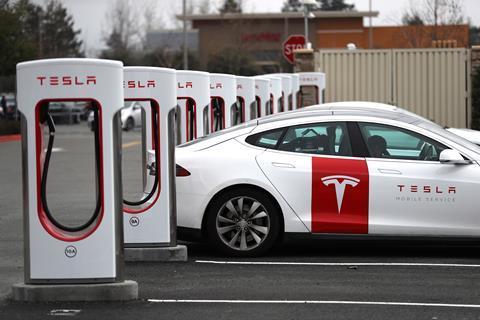 Supercapacitors offer ways to prolong the life of vehicle batteries by providing bursts of power for acceleration, and potentially have uses in rapid charging

Supercapacitors are usually made from two electrodes of porous activated carbon, separated by an organic electrolyte, and store charge electrostatically. ‘We don’t put the charge into the material, but only on the surface, which is why it has a lower energy density,’ explains Billy Wu, an electrochemical engineer at Imperial College London, UK.

Best of both worlds

Lithium ion batteries can store around 20 times more energy for their weight than supercapacitors, but they take time to discharge this energy due to resistance within the device, limiting their power. ‘What people are looking at now is maybe combining the best of both worlds, having both batteries and supercapacitors together,’ says Wu.

An electric car might run at an average power of around 20kW, but require peak power of 100kW during rapid acceleration. Even though this level of power is only needed for a short time, it means the vehicle needs extra battery cells. Supercapacitors can provide the power for acceleration, while the battery provides the average power and recharges the supercapacitors, meaning overall the vehicle requires a smaller battery pack. ‘It would allow you optimise the battery,’ says Wu. ‘If you want a battery that has more power, typically you have to sacrifice energy. With a new configuration, you could optimise your battery for energy, and push your power capabilities to the supercapacitors.’

They don’t store large amounts of energy, but they are high powered devices, primarily because the electrons can transition back and forth very quickly

For electric cars, supercapacitors ‘would primarily be used to take away all the peak loads from your battery, so the battery would have an enhanced life,’ says Bendale, careful to stress that this is a general principle that doesn’t necessarily reflect plans relating to the deal with Tesla. However, there are some applications where supercapacitors could replace batteries entirely. In some Chinese cities, electric buses have their supercapacitors recharged in seconds by induction loops at each stop.

One of the applications is as a replacement for lead-acid batteries for restarting large diesel engines. ‘Compared to batteries, ultracapacitors operate very efficiently at extreme temperatures, including at –40°C,’ says Jussi Pikkarainen at Skeleton. ‘Another advantage is that they have a lifetime of a million plus [charging] cycles, whereas lithium batteries last around 2000–3000 cycles.’ They are especially suitable for supplying power to trucks in the northern US, Canada, Scandinavia and Russia. ‘Even when the battery is empty, when it is very cold, it works,’ says Pikkarainen. US company Ioxus offers a product it says can eliminate lead–acid batteries for starting truck engines and save over 1800 tonnes of recycled lead over 20 years for a typical logistics fleet.

Supercapacitors are useful where there is lots of load cycling too, to balance supply and demand rapidly on an energy grid. Skeleton provides a supercapacitor that helps stabilise the microgrid on the Isle of Eigg in Scotland, which protects backup batteries and smooths out the peaks and troughs of power demand. ‘They provide frequency regulation and protect the grid and batteries from sudden events of peak power,’ says Pikkarainen, who sees this as another growth area for supercapacitors, especially for intermittent power sources such as solar and wind.

The technology is evolving to push performance. For example, changing the electrolyte chemistry allowed Maxwell to push maximum voltage from 2.7V to 3V. ‘You always look for new materials or new electrolyte chemistries to give you higher stability and higher power. The whole idea is to drive to higher energy, without sacrificing power,’ says Bendale.

Wu believes that Tesla’s primary interest in Maxwell is in supercapacitor technology, especially for its proposed all-electric truck, the Tesla Semi. However, Brendan Howlin, a materials scientist at the University of Surrey, UK, sees supercapacitors playing an important role in superfast charging of electric vehicles.

Howlin is part of a group that developed crosslinked gel-matrix polymer electrolytes that exhibit capacitance values more than 100 times those of conventional electrolytes. A start-up company, SuperCapacitor Materials, is further developing and commercialising the technology. Meanwhile, Howlin is optimistic about supercapacitors’ roles in energy generation, aerospace, mobile phones, biosensors and flat screen electronics. ‘The future is probably going to be more supercapacitor based than battery based,’ he says.

Not everyone agrees. ‘The best lithium ion batteries are starting to approach the power densities of a supercapacitor, because we have engineered them so well,’ says Wu. ‘There is an argument that we won’t need two different technologies.’