A new flexible aqueous ionic battery is the first of its kind to operate without an electrolyte-driving pump. This makes the battery much smaller than its predecessors – about the size of a USB drive – and simple and cheap to manufacture with no metal components.

Conceptually similar to an electrical circuit, in an ionic circuit ions carry the charge instead of electrons. But metal cannot conduct ions, and instead of a wire the ions travel through an aqueous electrolyte. The best example of this is you – the human nervous system is a vastly complex ionic circuit, where sodium and potassium ion gradients carry information through each nerve cell.

Indeed, ionic circuitry has the potential to interface more directly with biological systems than traditional electronics, and the absence of toxic metal components makes them an attractive prospect for implantable applications. 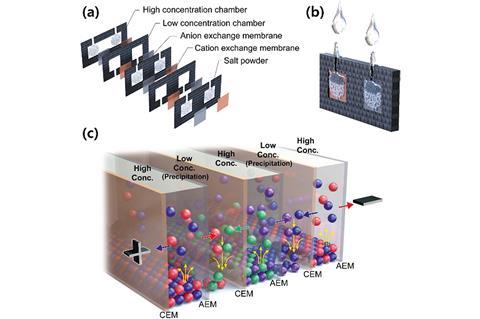 Fully ionic power sources for such ionic circuitry typically operate by reverse electrodialysis, where salinity differentials across ion selective membranes generate charge. A salt solution sandwiched between an anion selective membrane and a cation selective membrane, each with pure water on the other side, will lead to positive and negative ions diffusing in opposite directions and creating a potential difference. Typically, a mechanical pump is required to circulate the electrolyte and maintain the salinity gradient so that the battery can continue producing power.

Taek Dong Chung and his colleagues at Seoul National University have designed a new type of battery that operates on a phenomenon they call precipitation-assisted reverse elecytodialysis. Their battery consists of a stack of alternating chambers of fresh water and dissolved salt, separated by cation and anion selective membranes. The trick is that every first salt chamber contains BaCl2 and every second salt chamber contains Ag2SO4, both of which are soluble. All of the anions move one way and all of the cations move the other, leading to the formation of insoluble BaSO4 and AgCl salts in each of the fresh water chambers, which spontaneously precipitate out of the electrolyte, removing themselves from the equation.

‘It is a fascinating alternative as a new power source for active biosensors,’ says Chung. ‘These cells can be fabricated with all organic materials at very low cost, and they avoid the huge amounts of toxic metal waste from traditional batteries.’ Another advantage is that the batteries are assembled dry and activated by adding water. As they are electrochemically inert until water is added, they could be stored for long periods.

‘It could also be used to power sensors embedded in cell cultures,’ comments Hsueh-Chia Chang, an expert in biosensing at University of Notre Dame, US. ‘Since the desired current is ionic anyway, there is no need to involve metallic electron-transfer reactions, which are harmful to living cells. I see many medical and biological applications in the future, once the lifetime of the reverse electrodialysis battery is increased to practical values.’