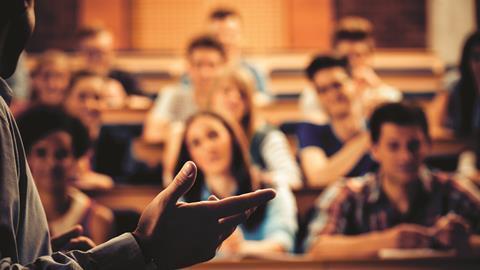 Predicting which undergrads will succeed in chemistry – and which might struggle

Researchers at Washington University in St Louis have examined cognitive differences in university students that may contribute to their high dropout rate from introductory undergraduate chemistry courses. They found that those who can make accurate extrapolation predictions based on concepts presented in class – what they dub ‘abstraction learners’ – consistently outperformed so-called ‘exemplar learners’ who have trouble doing so and instead depend on rote memorisation. These performance differences were even more pronounced for those enrolled in higher level organic chemistry courses.

The Washington University team studied more than 800 students taking chemistry courses over three semesters at a highly competitive US research university, roughly half of whom were classified as having difficulty bridging the gap between a concept and an illustrative example. The researchers used a learning assessment to determine how well these students understood abstract concepts presented during a fictional assignment that required them to learn the functional relation between two new elements associated with a new organism supposedly discovered on Mars.

The researchers found that active learning, at least in the form of a peer-led approach, helped a subset of the exemplar learners perform better. To determine whether these results are replicated in other introductory scientific courses and at other research institutions, the researchers are studying these effects in other science, technology, engineering and mathematics (Stem) classes and at different universities.

Tools to anticipate which students might have difficulty in chemistry and other science subjects are helpful as poor grades in these classes are a major contributor to undergraduates leaving Stem degrees. ‘We know people who are rote learners struggle with science, and if we can identify them early, we can change the curriculum and put in supplemental support,’ study co-author Regina Frye tells Chemistry World. ‘Since we have shown that their concept-building approach does predict their effective performance, now we are looking at what types of interventions you may use that could help these students.’