Scientists in Switzerland have developed a nanoreactor that can synthesise and release the antibiotic cephalexin, which is used to treat bacterial infections.

Lowering the drug dose required to effectively treat a patient would save money and reduce side effects. To achieve this, one area of research is focusing on using a ‘prodrug’ approach in which less toxic substrates, or prodrugs, are given to a patient and are converted to the active drug form by an enzyme only at a specific site. To maintain its catalytic activity, the enzyme needs to be protected from the surrounding environment, but also be accessible to the prodrug and able to release the final active drug.

Wolfgang Meier and colleagues at the University of Basel have designed a biocompatible nanoreactor that can effectively protect an enzyme. The nanoreactor comprises a copolymer, an outer membrane protein from bacteria cells (OmpF) and the catalyst penicillin acylase. When mixed together, the copolymer self assembles into vesicles forming, along with the membrane protein, a membrane around the catalyst that allows passage of molecules such as a drug and substrates. 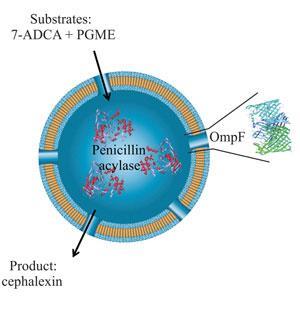 The nanoreactor was tested by exposing it to two prodrugs that can be catalysed to form cephalexin (7-ADCA, which is 7-aminodesacetoxycephalosporanic acid and PGME, which is phenylglycine methyl ester), an antibiotic regularly used to treat bacterial infections. Bacterial growth on agar plates in the presence and absence of the nanoreactor was monitored and it was found that bacterial growth was effectively inhibited.

‘The nanoreactors could locally synthesise antibiotics on demand with control of the amount and timing of synthesis and release,’ says Zhongwei Gu, an expert in polymer chemistry at Sichuan University, China. ‘They have the potential to achieve significant performances in bioengineering and nanomedicine.’

Meier’s team plans to find a way to immobilise the nanoreactors so that they can be located in a specific area, such as around an implant.