A microfluidic device that can distinguish between stages of malarial infection

Scientists in Canada have developed a method to study the changes in red blood cells caused by the most common malaria parasite Plasmodium falciparum. 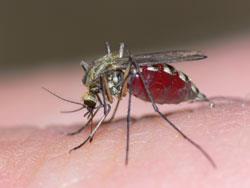 The malaria parasite is spread by mosquitoes

Malaria causes approximately one million deaths each year and there is a lot of research surrounding the disease’s biomechanics, aimed at diagnosing patients and developing treatments. The parasite, spread by mosquitoes, infects red blood cells and reduces their ability to deform. Measuring the deformability of an infected red blood cell can provide vital information about the disease’s mechanism and response to treatment.

Current methods to measure deformability are complicated or not sensitive enough, but Hongshen Ma at the University of British Columbia, Vancouver, and colleagues, have designed an accurate and simple microfluidic device for this purpose. The device consists of two layers that control the cells so that only a single cell is introduced into a funnel containing a series of different sized constrictions. The pressure required to push the cell through a constriction is measured precisely and used to calculate the deformability.

The team used their device to show that the deformability of uninfected red blood cells can be distinguished from cells at various stages of infection.

Abhishek Jain at Boston University, US, is an expert in biomedical devices and comments that ’the device is elegant in the sense that it can be easily scaled up for diagnosis and high throughput drug testing for not only malaria but other pathologies like sickle cell anaemia’.

’We hope our technique will provide a useful biomechanical assay for the development of new drugs,’ says Ma, who adds that ’the ability to easily measure the deformability of red blood cells will help researchers study the mechanism of the disease and investigate complex challenges, such as drug resistance.’

Ma’s team plans to further test their device and use it to study the mechanisms of drug resistance.