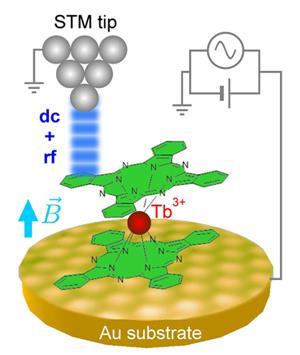 A new technique that can ‘see’ individual spins of electrons and nuclei in single molecules could enable nuclear magnetic resonance (NMR) spectroscopy atom by atom. 1 As well as providing a tool for high-resolution structure determination, the method might make it possible to manipulate single spins – a capability relevant for developing technologies such as spintronics and quantum computing.

The method has been devised by Stefan Müllegger and coworkers at the University of Linz in Austria. The ultra-high-resolution detection and control of spins is ‘a very hot subject’, says Wolfgang Wernsdorfer of the Institut Néel in France.

Conventional NMR typically excites transitions between spin states of at least 1010 spins, which is a long way from a single-molecule sensitivity. But Wernsdorfer and his coworkers have recently reported the manipulation of nuclear spins in ‘molecular transistors’, where a single molecule is contacted by two electrical tunneling junctions.2

Müllegger and colleagues have used a different approach that involves rigging up a scanning tunneling microscope (STM) so that the current due to electrons tunneling between the microscope’s tip and the sample becomes sensitive to the flipping of spins – either electronic or nuclear – in the sample atoms.

The researchers added a homemade circuit into their STM that imposed a radiofrequency (rf) modulation on the regular dc tunneling current. In a magnetic field, the spin states of the sample are split just as they are in conventional NMR or electron spin resonance (ESR). When the rf frequency is tuned to a resonance with the transition between spin states, this significantly alters the dc tunneling current, creating a peak in the spectrum as a function of rf frequency. It’s not fully understood how this effect arises: ‘the details are still being discussed,’ says Müllegger.

The Linz team have demonstrated the method by using their customized STM to detect electron-spin transitions in a terbium ion sandwiched between two phthalocyanine molecules in an organometallic complex adsorbed on gold. They could use the STM to obtain a regular image of the 2-nm-wide, eight-petalled complex, and then probe the spin states with the tip poised above it. They could also monitor several ‘hyperfine’ transitions due to coupling between the electron spins and the nuclear spins of the terbium ion.

There are ambiguities still to be resolved, however. The data are quite noisy, says Wernsdorfer, and he would like to see the entire spectra, not just the small intervals containing the peaks, before judging the claims. He is not yet convinced that the authors are seeing all of the transitions that they report.

Wernsdorfer says that the STM method should, however, be quite easy to implement. As with his earlier work, the present study is largely motivated by the possible use of nuclear spins as quantum bits (qubits) in quantum computers. ‘One of the next things we will try is to obtain control over reading and writing the spin of single-molecule qubits,’ says Müllegger. But he adds that molecular structure determination could be another application. ‘I can certainly imagine that it is possible to deduce important details of the structure of large molecules,’ he says, ‘but that is beyond the reach of our present experimental setup.’