Profile: Flexibility on the move

Jeff Hrkach talks about how he got into polymer chemistry 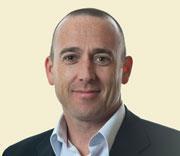 A chance encounter in a pub steered John Milton’s career in a new direction. After a decade in the pharmaceutical industry, Milton was ready to follow a new career path - one that would ultimately lead to the technology that was instrumental in the move to large scale DNA sequencing.

In the early 1990s, fresh out of graduate school and armed with a chemistry PhD, Milton joined what was then Glaxo Wellcome as a medicinal chemist. ’This was back in the days when large companies like Glaxo and Pfizer were advertising for 100 organic chemists at a time,’ he recalls. He soon discovered that the focus of his PhD - the chemistry of DNA - was directly applicable to the job. ’I joined the HIV programme and had the good fortune to work on several successful products during those first few years,’ he says. ’My career got off to a flying start.’

Despite this initial success, Milton aspired to put his scientific background to more exciting and innovative use. He jumped at the chance to join Xenova, a small Cambridge-based biotechnology group. ’It was an opportunity to be a medium-sized fish in a small pond,’ he says of his time at Xenova, where he focused on overcoming drug resistance in cancer.

From pharma to DNA sequencing

Then, by a stroke of luck, he bumped into one of the co-founders of Solexa in a Cambridge pub. Founded by two lecturers from the University of Cambridge chemistry department, Solexa was a recent spin out company with seed funding to explore a promising new DNA sequencing approach. ’I decided to step off the pharmaceutical conveyor belt,’ Milton says. ’Looking back, I think that was the best move I ever made.’

Joining Solexa as head of chemistry, Milton quickly built up a multidisciplinary scientific team made up of specialists in synthetic nucleotide chemistry, fluorescence chemistry, photochemistry, enzyme engineering, molecular biology, optical physics and chip surface chemistry. Over the next 3 years, Milton’s team developed the sequencing chemistry that became an integral part of the Genome Analyzer platform, which is now considered the market leader in sequencing technology and ultimately led to the sequencing of a full human genome. In 2007, Solexa was sold to Illumina for $650 million (?404 million). That was the cue for Milton’s departure. 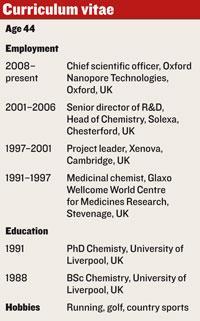 Believing that the next paradigm shift in sequencing would be some time coming, Milton spent approximately a year in the venture capital community - until Oxford Nanopore Technologies came out of stealth mode and offered him a position he couldn’t refuse. ’They had come up with a technology that had the potential to move DNA sequencing to the next level,’ he says. Nanopore sequencing is a complete step change from the old processes, he explains. ’We are working to eliminate all optical aspects from the sequencing system. In effect, we want to build a sequencing instrument on an electronic rather than an optical platform.’

From humble academic beginnings, Oxford Nanopore Technologies has thrived, expanding from 25 to 90 employees in just 2 years. Now chief scientific officer, Milton is responsible for developing the company’s revolutionary nanopore-based sequencing technology, which he says has the potential to create a new generation of users. ’It will be much smaller, faster and easier to use. You won’t need armies of PhD students to run it - just a well trained technician.’

Reflecting on his career to date, Milton believes that a background in chemistry affords a degree of flexibility that shouldn’t be underestimated. ’In 2001 I first moved into DNA sequencing, and by 2004 my team had built what is now the standard in sequencing technology. That speaks to the fact that chemists can turn their hand to anything,’ he says. Flexibility certainly characterises his future career plans. ’I’m not sure what my next career move will be. It won’t be pharma, and it won’t be DNA sequencing - it will be whatever interests me next,’ he says. ’It’s not about where you start; what matters is where you finish.’