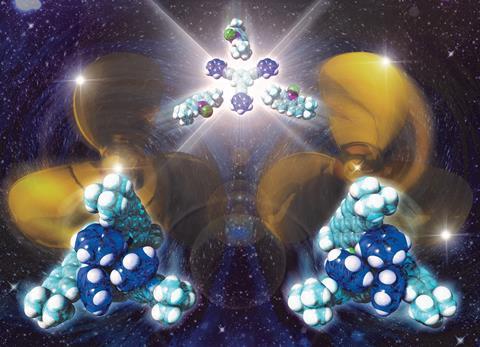 This unusual example of a single molecular host with solvent sensing abilities, made by Takanori Fukushima and colleagues at Tokyo Institute of Technology, has a central benzene plane with three π-blades, all facing the same direction relative to the plane. The team discovered the system when testing a new method for synthesising highly symmetric and sterically congested π-systems. It involves a benzannulation reaction, which simultaneously forms the three arms of the propeller molecule.

‘Their synthetic protocol is very powerful and now provides supramolecular chemists access to a three-dimensionally-designed π-conjugated structure,’ says Masayuki Takeuchi, an expert in molecular recognition and molecular sensors at the National Institute for Materials Science in Japan. ’I think their benzannulation reaction can pave a new way to construct highly-dense π-conjugated structures in small molecular as well as macromolecular systems with stimuli-responsiveness.’

The C3-symmetric propeller-shaped molecule undergoes helical inversion between P- and M-conformers, whose ratio is biased under the influence of solvent chirality

Fukushima’s team found that the blades in one of the structure’s helical conformers were better solvated, a result of chirality transferring from the solvent to the molecule. ‘Solvation, which is a dynamic process, cannot induce chirality of organic molecules upon dissolution even though the solvent molecules are chiral,’ Fukushima explains. ’So we were excited at the present finding.’

Fukushima says that ‘one of the most straightforward applications would be a chiral sensor with environmental responsiveness. The striking feature of this system may be its versatility, since general molecular chiral sensors have a dedicated design for a specific target molecule based on a lock and key principle. Also, a proper design of the propeller blade may provide a ligand molecule for metal ions for the development of environmentally responsive catalytic systems.’