Protected metal complexes can team up with enzymes for multistep reactions

By protecting a transition metal catalyst with a protein coat, scientists have managed to couple up biocatalysts and chemical catalysts to perform a cascade reaction.

When students and post-docs moved from Nick Turner’s lab at the University of Manchester, UK, to Tom Ward’s at the University of Basel, Switzerland, it prompted an intriguing collaboration between a group with experience with naturally occurring enzymes and Ward’s group, which creates artificial metalloenzymes by combining transition metal catalysts with proteins. The result was a way of combining traditional enzyme biocatalysts  with chemical catalysts to perform reaction cascades.

In our cells, enzymes happily react with a substrate and then pass the product on to another enzyme to perform the next bit of chemistry. Unfortunately for chemists, just introducing a transition metal catalyst into one of these cascades doesn’t work, the catalyst and the enzyme tend to inactivate each other. Instead, to introduce new chemistry, naturally occurring enzymes have to be modified. Or at least that used to be the only option.

Ward’s group has been working on making artificial metalloenzymes by sitting traditional transition metal catalysts inside proteins, creating catalysts that can perform chemistry traditionally unavailable to enzymes. He says it was the transfer of staff from Turner’s lab that led to the next step of combining the artificial metalloenzymes with naturally occurring enzymes.

To test the hypothesis, the group decided to try and use an enzyme Turner was familiar with, monoamine oxidase (MAO), to synthesis enantiopure amines. MAO is a highly selective oxidase which, in collaboration with a reducing agent or catalyst, converts racemic amines just one enantiomer. Usually the catalyst used is heterogeneous, it’s solid and used after the MAO. An artificial metalloenzyme would be homogeneous and allow the reaction to proceed without any intervention between the two steps. 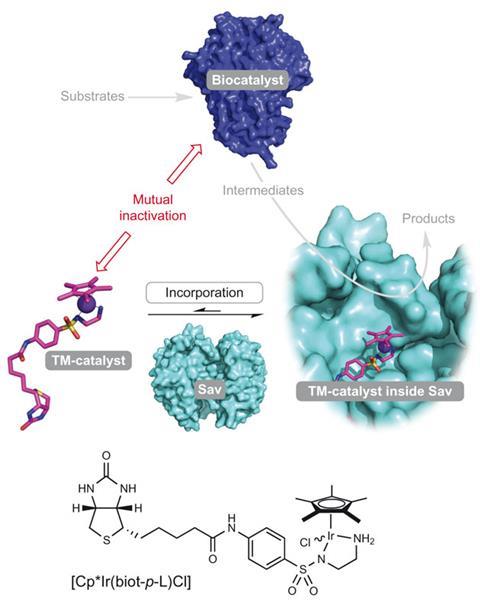 A streptavidin coat protects the metal catalyst and enzyme from each other, so both can function in tandem

The team created their artificial transfer hydrogenase (ATH) by shielding an iridium containing reduction catalyst with a streptavidin protein. Using just the MAO and the iridium catalyst resulted in nothing, but when the ATH was used instead, the team saw the starts of a cascade. Modifying and improving the enzymes eventually led to conversion efficiencies for some reactions of 99%, with similar enantiomeric excesses.

Corinna Hess from Durham University, UK, says that this work ‘nicely illustrates that artificial enzymes aren’t merely a biochemical novelty, and demonstrates their great promise for catalysis.’ Before adding that ‘the results are highly encouraging for the use of artificial enzymes in industrial biotransformations, and many inorganic motifs still remain to be explored.’

However, for Ward and Turner, improving industrial chemistry is not the ultimate goal. ‘There are better ways of doing that chemistry,’ explains Ward. Instead, the team see their work as a starting point towards introducing inorganic chemistry into cells.