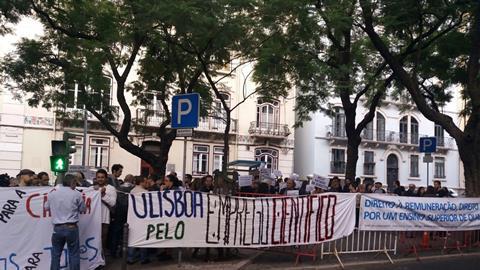 Protests over unspent funds as Portuguese scientists are squeezed

Hundreds of researchers and professors have protested the failure to spend funding earmarked for research, which they claim is strangling Portuguese science. The demonstration took place at the end of October in Lisbon, and brought together a number of scientific associations.

The Union of Higher Education National Union (SNESUP), one of the organisers of the demonstration, says that ‘over 5300 applications’ from professors and researchers to a national initiative to address job insecurity are waiting to be resolved, as well as 2500 postdocs waiting to see if their scholarships are turned into contracts.

According to an opinion piece in Diário de Notícias signed by Gonçalo Velho, president of the SNESUP, the FCT hasn’t spent €76 million (£67 million) of its budget, more than half of which is EU funds. The affected programmes are part of the job security initiative and the Foundation of Science and Technology (FCT), the funding arm of the Portuguese science ministry. Velho argues that the FCT has enough money in its coffers to fulfill the promises made to postdocs and researchers. ‘The part of the budget that is not being executed would cover the programmes and there would still be €13 million left.’

Velho says the situation is an ‘asphyxiating stalemate’, and adds that national institutions aren’t applying the law that turns grants into work contracts. ‘Things are looking bad, and the government is failing to apply the measures that were approved in parliament, that are part of the agreement that supports the government and that are even part of the government programme.’

These roadblocks are fuelling a brain drain in Portugal, Velho notes. ‘Many qualified researchers who came back to Portugal through the FCT researcher programme are now faced with a block. We face losing an entire generation.’

An FCT spokeswoman told Chemistry World that 2016 saw ‘a higher execution of funds in comparison with 2015’ and expects this trend to continue for 2017. However, she recognised that, in areas dependent on multiannual investments, such as scholarships and R&D projects, ‘the reduction of attributed funds in the period 2013–2015, the conclusion of a large number of scholarships attributed in 2012 and the delay of the 2014 R&D project contracts dictated a lower execution of funds’.

Anthony Burke, a chemist at the University of Évora, Portugal, agrees that there is potential for a brain drain. ‘A lot of the universities are fully staffed at the moment and unfortunately there are not many vacancies for extra-staff, particularly as funding to the universities for HR contracting has been cut by the government over the last number of years.’

Burke added that the government is trying to implement some schemes to reduce the precariousness of research grants in the country but says that efforts have been limited so far. ‘We have a lot of postdocs that have been in the system for a long time, and would like to have more job security,’ he says.