Pushing praseodymium past its oxidation limits 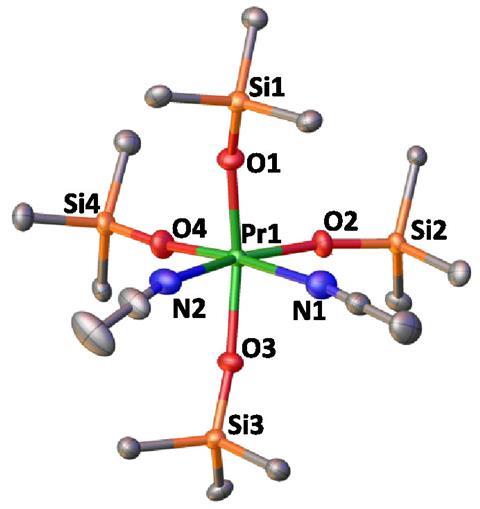 A team of chemists led by Marinella Mazzanti from EPFL, Switzerland, has managed to isolate a complex of praseodymium(IV) for the first time.1

Normally, lanthanide ions are at their most stable in their +3 oxidation state. Further oxidised +4 species are hard to find, particularly those that form molecular complexes. Until last year, chemists had only identified one lanthanide that could form stable molecular complexes in its +4 oxidation state – cerium. Its strong oxidising power rapidly led to myriad uses in catalysis, materials science and the separation of rare earths. Attracted by cerium’s versatility, researchers have been trying to find other highly oxidised lanthanide ions.

Mazzanti and her team – who have also recently isolated terbium(IV) – managed to capture praseodymium(IV) compounds using stabilising siloxide ligands. To yield these highly unstable products, the chemists first needed to design a new praseodymium(III) precursor that could withstand the transformation, as previous efforts to prepare praseodymium(IV) had only resulted in unwanted cation exchanges or ligand oxidations. Once they had prepared and characterised the praseodymium(III) complex, they oxidised it.2 An immediate colour change to an orange–brown tone suggested the reaction had worked.

The complex’s structure was confirmed using x-ray crystallography and the presence of praseodymium(IV) by a number of experimental and computational techniques. Magnetic susceptibility measurements overlapped with data previously obtained for complexes of neighbouring lanthanide cerium(III), which have the same number of electrons as praseodymium(IV).

Experts speculate that praseodymium(IV) compounds could be used in catalysis as powerful oxidising agents – mimicking some of the current uses of cerium(IV). Moreover, this highly-oxidised lanthanide could exhibit interesting magnetic and luminescent properties, which could lead to new functional materials.