Researchers in Beijing have developed a new type of incandescent display made of thin layers of highly aligned multi-walled carbon nanotubes (CNTs)1.

Having already shown that thin films of CNTs can act as powerful loudspeakers2, Liang Liu, Shoushan Fan and colleagues at the Tsinghua-Foxconn Nanotechnology Research Center at Tsinghua University have shown that with short pulses of voltage (20V), the films can be stimulated to glow at a temperature of 1542 K. The time needed to switch the light on or off was less than one millisecond each way, making its response faster than that of liquid crystal displays (LCDs). The light is non-polarised, so it can be seen equally well from any angle - another advantage over LCDs, the authors say.

Using a variant of the chemical vapour deposition method which they developed in 20063, the researchers prepared multi-walled nanotubes consisting of concentric stacks of three to ten tubes with diameters ranging from 6 to15 nm. Using scanning electron microscopy, they showed that the nanotubes in their thin, transparent films are ’superaligned’, that is, arranged almost perfectly parallel, and with uniform density.

The authors conducted their incandescence experiments in a high vacuum, but believe that in practical applications the vacuum may not be necessary. ’Filling with inert gases such as nitrogen, argon [and so on], which can prevent the CNTs from being burnt at high temperature, will also work for this device,’ lead author Peng Liu told Chemistry World. 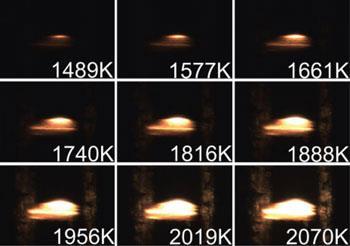 Microscopy images of an individual pixel at different temperatures

Based on known physical parameters of graphite, the researchers conclude that the lifetime of nanotube displays should be at least as long as that of a traditional light bulb. They are hoping that it may turn out even longer, based on the assumption that the aligned nanotubes are more resistant to evaporation than graphite.

Pioneering nanotube researcher Cees Dekker from the Technical University of Delft, Netherlands, praised the new advance. ’This is very original work, where the authors utilise the special properties of carbon nanotubes - in particular their thermal properties - to develop a novel type of display,’ he said. ’It is interesting that they even demonstrate video-rate switching of pixels, which will open up an array of possible applications.’
Michael Gross