A new drug being developed by scientists at Cleveland BioLabs (CBLI) in the US may hold the key to protecting healthy cells from the effects of radiotherapy during cancer treatment.

Current mitigation strategies involve doses of cytokines or antioxidants, whose effectiveness is limited. But a single injection of CBLI’s experimental drug Protectan CBLB502, given to mice before lethal total body irradiation, protected them from acute radiation syndrome, and improved survival - although tumours remained sensitive to the radiation. The drug also worked when given after irradiation. 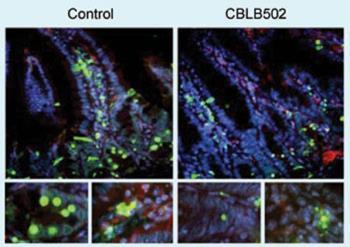 Chief scientific officer Andrei Gudkov explains that the mechanisms of death for normal and tumour cells are very different. ’Tumour cells are killed by radiation because their growth is out of control. Normal cells can stop themselves at check-points on the cell cycle to repair radiation damage - which is why, in principle, radiation kills cancer cells rather than normal ones.’

Tissue in the gastrointestinal tract and haematopoietic and lymphoid tissue - which make blood and immune cells - are most sensitive to radiation, and they die because the apoptosis process of programmed cell death kicks in before they are repaired. ’Most tumour cells have lost this ability to commit suicide,’ says Gudkov. ’If a drug could suppress apoptosis, it shouldn’t help tumour cells because they lost this mechanism long ago, but you could rescue normal ones.’ If the normal cells do not commit suicide, they would have a chance to repair themselves.

Tumours themselves provided the idea for a drug to temporarily halt apoptosis in healthy tissue, as the deregulated pathways that make tumour cells insensitive to apoptotic signals are known. The chemical lead came from the microflora that live on normal cells in the body. One of the chemicals they release to protect cells from their presence, flagellin, activates the NF[kappa]B pathway. This pathway, which makes cells resistant to apoptosis and other stress stimuli, is deregulated in many tumours. NF[kappa]B activates toll-like receptor 5, which is expressed in relatively few cells in the body - those most sensitive to radiation. CBLI used protein engineering to remove flagellin’s unwanted activities, and the result was a smaller protein that is stable, non-toxic, and 50 times less immunogenic

Because it is also effective after radiation exposure, it has potential as a rescue therapy after a radiological emergency. A Phase I safety trial of the drug in acute radiation syndrome, the only human testing required for this indication, is to start soon, and a Phase I/II trial in head and neck cancer patients to reduce the side-effects of radiotherapy and chemotherapy is also planned.

Gudkov adds the drug has other potential uses. ’It could work in any condition that involves acute stress,’ he says. ’This could include ischaemic diseases such as stroke, heart attack and acute organ failure.’

’These are interesting results and we look forward to following the progress of CBLB502 through planned clinical trials,’ says Joanna Owens, science information officer at Cancer Research UK.’If the protective properties seen in this laboratory study can be reproduced in people with cancer, this could be an important step towards reducing side-effects for people having radiotherapy in the future.’