The bionic leaf: creating fertiliser from sunlight from Chemistry World on Vimeo.

Harvard University chemist Daniel Nocera and colleagues have built upon the artificial leaf he pioneered in 2011, which splits water into hydrogen and oxygen when exposed to sunlight, to make microbes that manufacture and release fertiliser into the soil in which they grow.

The team has developed a ‘bionic leaf’ that pairs the water-splitting catalyst with Xanthobacter bacteria, and shown it can enhance the growth of radish plants. The bacteria fix hydrogen from the artificial leaf and carbon dioxide from the atmosphere to make a bioplastic that are stored inside the cells as fuel. 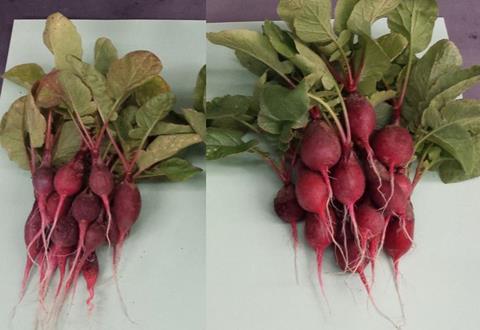 The radishes on the right were grown with the help of a bionic leaf that produces fertilizer with bacteria, sunlight, water and air.

Nocera discussed his new work, which has yet to be published, at the American Chemical Society’s Spring 2017 meeting in San Francisco. The innovation was inspired after His group leveraged their artificial leaf to make a liquid fuel last June. ‘Over the summer, we took hydrogen and directed that into the metabolic cycles of nature by using an enzyme carbohydrogenase in a cell, and then this bacterium would take hydrogen plus carbon dioxide and make liquid fuel,’ Nocera said. ‘This new bug is doing two things – it is breathing in carbon dioxide and making bioplastic and storing in the cells its fuel supply, and it is also taking nitrogen plus hydrogen to make ammonia.’

The ammonia accumulates in the microbe cells at first, but is eventually expelled into the surrounding soil, which can directly fertilise a plant.

‘You can bury [the bacteria] in the ground, and we can grow big radishes, really big radishes – so literally you can grow food in your backyard.’ Nocera said. ‘Because it has its own energy supply, it doesn’t need to see the sun anymore, the hydrogen already took care of that,’ he added.

The researchers estimate that the growth cycle for these radishes is four or five weeks. So far they have grown five crop cycles using the bionic leaf-derived fertiliser, and these radishes weighed 150% more than the control crops.

A single modified bacterium can run 800 trillion cycles that take nitrogen to ammonia. The ‘bionic leaf’ system scrubs 180 grams of carbon dioxide from the air, equivalent to 230,000 litres of air per 1 kWh of electricity. It operates at unprecedented solar-to-biomass yields of 10.7% and solar-to-liquid fuels yields of 6.2%, which far surpass the 1% yield of natural photosynthesis.

‘Because we have basically bottled sunlight in the form of this bioplastic, you could be fertilising whenever you want, at any time of the year,’ Nocera remarked. ‘We realised that we don’t need the sun anymore, and that is a very freeing principle in the design of this whole system.’

Because this new fertiliser wouldn’t require expensive industrial plants with large distribution systems, it could help feed people in poorer countries. However, Nocera is clear that this technology is nowhere near market. ‘I just wanted to find out if we could actually do it using the sun, and the answer is yes,’ he said. He and colleagues are now exploring ways to make this process faster, for example by putting more hydrogenase into the bug so that it eats the hydrogen quicker, or speeding up the metabolic pathways that convert hydrogen to ammonia or fuel.

There is also the possibility of putting other genes in microbes using solar energy to do water splitting, and have them synthesise different compounds. ‘You could potentially make anything that you would like, you have a solar-based manufacturing lab,’ Nocera tells Chemistry World.