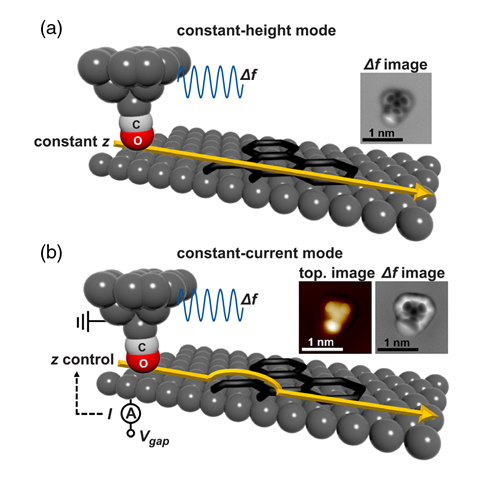 Combining atomic force microscopy (AFM) and scanning tunnelling microscopy (STM) has allowed scientists to refine imaging of 3D molecules – rather than the flat ones AFM works best with.1

STM and AFM are both types of scanning probe microscopy, in which atomically sharp tips on a cantilever scan over the surface being imaged, usually without touching it. In STM, a small potential is applied between the sample and the tip. The resulting current depends on the height and electrical properties of the surface. To produce the sharpest image possible, researchers often set the tip to move up and down, keeping the current constant as it sweeps across the surface.

In standard AFM there is no applied potential between sample and tip. The interaction results from the intermolecular forces between the atoms of the surface and the atom at the needle tip, which alter the cantilever frequency. AFM can give even finer resolution than STM, as well as providing different information. With no applied voltage, however, there is no continuous tunnelling current, and therefore no possibility to adjust the tip height to keep this constant. Keeping the force constant is extremely difficult as intermolecular forces can be either attractive or repulsive depending on the distance and the atoms involved. Most AFM experiments, therefore, keep the tip at a constant height. This becomes problematic as most molecules aren’t flat but three-dimensional and protrude from the surface, so the tip has to be moved up to prevent collision, blurring parts of the image.

Surface physicist Daniel Ebeling of Justus Liebig University Giessen in Germany and colleagues investigated a technique invented three years ago – combining AFM and STM – using metal needles tipped with linked carbon–oxygen atoms. Similarly to STM, they applied a small potential between the tip and various molecules adsorbed onto a copper surface, adjusting the height of the tip to keep the tunnelling current constant. As they did so, they monitored the frequency shift of the cantilever oscillations from intermolecular forces. This allowed them to acquire images of surfaces and molecules protruding from them with subatomic precision. Ebeling acknowledges several groups have combined STM and AFM like this before. He says, however, that his group is the first to ‘systematically describe this method and compare it to the standard one’, as well as ‘using it to determine quantitatively the topography of objects’.

Franz Giessibl at the University of Regensburg, Germany – who has used the technique previously2 – is cautiously impressed. ‘The study itself is beautiful and meticulous, but if you read the paper it sounds like it’s a new method, and that’s really not the case.’