Remote powered lab on a chip

A team of US scientists has developed the first lab on a chip device to be powered remotely.

Wen Qiao at the University of California, San Diego, made a microfluidic chip that can be powered with a commercially available radio frequency transmitter for electrophoresis experiments.

Electrophoresis is a technique that uses an electrical field to manipulate charged particles. To increase throughput, scientists have developed microchip devices, but they require bulky electrical equipment. ’One of the major complaints about microfluidics has been that, while the chips are quite small, the associated equipment is large. This work is truly revolutionary,’ says Chuck Henry, an expert in electrophoresis at Colorado State University, US.

Qiao’s team made the chip by printing a circuit onto a plastic sheet. Within the circuit, they placed a chamber containing microwells. The team fed negatively charged nanoparticles into the chamber, which moved about randomly at first. When they induced an electric field with a radio frequency identification (RFID) reader, the beads became trapped in the positively charged wells. The reader transmits a radio frequency pulse, which induces an electric current to power the chip. RFID readers are used to prevent theft in supermarkets. Produce is labelled with RFID tags, which contain information that is picked up by scanners. 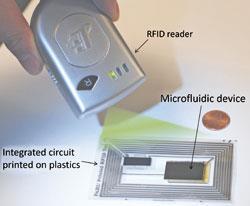 The chip consists of a printed integrated circuit and a microfluidic device, powered wirelessly by a palm sized RFID reader

The device is cheap to produce and simple to use and can be used in the same way as a microscope slide, with the RFID transmitter mounted next to a microscope stage and a camera to capture images of the moving nanoparticles. Qiao says that the chip will ’greatly simplify the operation of the device for pathologists and clinicians whose training and practices have been mostly on optical microscopes, with limited experience with sophisticated electronic instruments.’

While this is an encouraging initial step, Qiao says that more work is required to develop devices that can be powered with a greater range of frequencies. The team now intends to design other microfluidic chips that will be capable of diagnosing diseases.