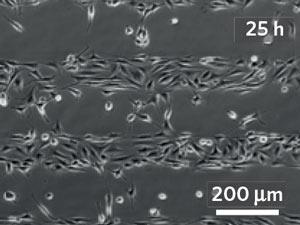 Cells found it harder to cling to areas that had been patterned. The technique could be used to direct cell aggregation

Patterning surfaces with nanoscale craters can interfere with cells’ ability to stick to surfaces, researchers in the US have shown. The work, achieved using a novel patterning process, could have a variety of uses ranging from providing fundamental insights into the growth mechanisms of cells to laboratory culture of stem cells, and even helping to embed medical implants.

Many biologists and materials scientists have been investigating the effects of nanoscale geometry on cells. Cell attachment and differentiation can be controlled by functionalising surfaces with proteins, but this can be complex and difficult to implement on a large-scale or transfer into the human body, where the proteins might cause allergic reactions or simply be broken down by the immune system. The geometry of surfaces is far more robust. Hojeong Jeon and colleagues at the University of California, Berkeley used a femtosecond pulsed laser to etch out a series of precisely-spaced nanometre-scale pits on a quartz surface by a process called multiphoton ablation lithography.

The researchers then cultured fibroblasts on surfaces that were partly unablated and partly covered with pits of various sizes and spacings. They found that cells could attach to all the types of surface they tested, but found that they preferred to settle on smoother surfaces. After 10 hours, the cells had formed a distinct striped pattern as they settled on the crater-free surface, and this behaviour became more pronounced over time.

Jeon, now at the Korea Institute of Science and Technology in Seoul, says the laser ablation technique can be scaled-up and could control the adhesion of tissue to a wide variety of materials, such as biopolymers in artificial dental implants or bone replacement implants. He also believes it may be useful culturing stem cells for both medicine and research. 'A lot of researchers want to get many, many stem cells, so they need to grow the cells without differentiation,’ Jeon says. ‘The differentiation and proliferation are related to the cell attachment, and we can control the adhesion perfectly by using this nanopatterned surface.’ Fellow team member Kevin Healy says that researchers in the UK have already shown that strategically placed holes can control cell differentiation. 'If we could use this we could spatially template different cell types, provided they migrate,' Healy says.

Christopher Bettinger of Carnegie Mellon University in the US is impressed. 'I would take this at face value, that there's a really cool, really interesting phenomenon here,' he says. He is reluctant, however, to make concrete predictions about tissue templating or organ replacement. 'It could be useful but it's unclear how.'