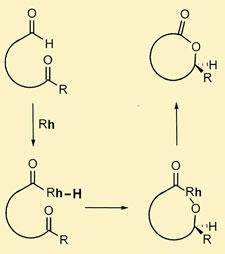 Rhodium inserts into the C-H bond of an aldehyde, before bonding to a neighbouring ketone, then reductively eliminating to leave the lactone

Chemists in Canada have developed an efficient new way to make lactones - chemical components of many natural products and drugs.

Vy Dong and colleagues at the University of Toronto have pioneered a rhodium-catalysed route to lactones that promises to be faster and much more direct than current methods. The reaction is also highly enantioselective, giving one of two possible mirror-image products in large excess over the other.

Dong’s approach exploits rhodium’s preference to selectively insert into the C-H bond of aldehydes, ignoring the myriad other C-H bonds covering any organic molecule. Once inserted, Dong showed the rhodium will then react with a neighbouring ketone, before reductively eliminating to give the lactone by installing a new C-O bond.

’Selectively reacting via a C-H bond means you can rapidly set up molecular complexity,’ Dong told Chemistry World. ’And the reaction is very atom efficient - as well as being catalytic, every atom in the starting material ends up in the product.’

The method is much more direct than current routes to lactones - non-catalytic approaches which typically involve pre-activating a carboxylic acid to react with a neighbouring alcohol group. However, as organic molecules typically contain many such alcohols, protecting groups must be deployed to ensure that only the desired group reacts, adding extra steps to a synthesis.

"It’s not yet clear how general this reaction will be - but if it can be extended to other substrates, it would be very useful" - Stephen Clark

’It’s not yet clear how general this reaction will be - but if it can be extended to other substrates, it would be very useful,’ Stephen Clark, who studies stereoselective C-H insertions at the University of Glasgow, UK, told Chemistry World. ’The reaction is fascinating, from a mechanistic point of view - selectively oxidising the aldehyde while reducing the ketone.’

As well as further investigating the scope of the reaction, Dong plans to look at other potential catalysts. ’The cost of the rhodium catalyst is one of the issues we’re planning to look at - I think that an iron or cobalt catalyst could ultimately be able to do the same thing. We started by looking at rhodium because we knew it would do the C-H insertion.’

Dong told Chemistry World that her next aim is to understand the mechanism of the reaction, and establish the selectivity. ’Our dream sequence would be to build macrolactone-based natural products - structures based around a large lactone ring.’