Delegates at the First European Chemistry Congress in Budapest, Hungary, heard from chemists who believe that automated synthesis systems - ’robot chemists’ - could help to generate target molecules with a fraction of the work involved in a conventional synthesis. 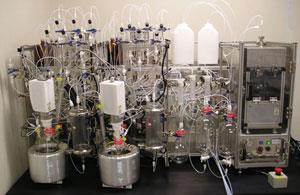 Takashi Takahashi of the Tokyo Institute of Technology, Japan, described how he and his team had used an automated machine dubbed ChemKonzert to create (?)-baccatin III, a well-known precursor of taxol, in 36 steps. The recently-published synthesis (Chem. Asian J. , 2006, 1, 370) required just two more synthetic steps to generate taxol itself. ’We decided to make taxol with just one student and a robot,’ explained Takahashi.

He is part of the team that originally built ChemKonzert, which has been marketed by the spin-out company ChemGenesis since 2002. The system can run continuously, and even updates users on its progress by mobile phone message. But Takahashi’s machine still uses the round-bottomed flasks of the traditional lab, along with centrifuges and chromatography columns to separate products.

Perhaps less familiar are systems that replace glassware with columns and cartridges that can be loaded with reagents, catalysts, or scavenger compounds that are bound to polymers.

Steven Ley of the University of Cambridge, UK, has used this approach in the first multi-step flow-through preparation of a natural product, generating (?)-oxomaritidine in seven synthetic steps (Chem. Commun., 2006, 2566). After presenting the work at the Budapest meeting, he told Chemistry World  that these techniques could eventually be used to generate kilos of products, or be hooked up to automated biological screening systems. ’And the price for this equipment is coming down all the time,’ he added.

Ley is collaborating with Syrris, based in Royston, UK, which makes continuous flow microreactors, to attempt an even longer synthesis that runs to 20 steps. He also uses the H-Cube, a microfluidic hydrogenation reactor made by Thales Nanotechnology, Budapest, Hungary. The company is now developing its X-Cube reactors to carry out a range of other transformations.

One major benefit of automation is that it frees chemists from the need to perform repetitive, simple reactions. ’We have to move away from that,’ said Ley. ’This can release their time for better thinking, better planning, better science.’ But for those worried that the robots might take over the lab, never fear. ’Machines don’t work in the absence of excellent people,’ Ley added.