An orally available drug for African sleeping sickness is on the horizon, say UK scientists

An orally available drug for African sleeping sickness could be on the horizon, say UK scientists who believe that such a drug would improve the lives of more than 50,000 people who are afflicted with the disease. The researchers have developed a molecule that acts on a new target protein, and kills the parasite responsible for the disease.

Paul Wyatt’s team from the University of Dundee, along with colleagues from the University of York, developed molecules that inhibit N-myristoyl transferase (NMT) in Trypanosoma brucei parasites. NMT adds a 14-carbon fatty acid to the end of over 60 protein chains within the parasite, which affects the proteins’ localisation, stability and function. ’That makes NMT a very good target,’ says Wyatt, ’because if we inhibit just one enzyme we get multiple downstream consequences. That gives it much greater chance of having profound anti-parasitic activity.’

African sleeping sickness is a two stage disease - the parasites are transmitted by the bite of the tsetse fly and start off in the bloodstream. Later, they migrate to the central nervous system (CNS) where they disrupt their host’s sleep patterns - hence the disease name. This poses a problem for potential medicines as they need to be able to penetrate the CNS - which is notoriously difficult because of the blood-brain barrier -to be effective against the second stage of the disease. A drug would also have to be selective for the parasitic version of NMT over the human type. 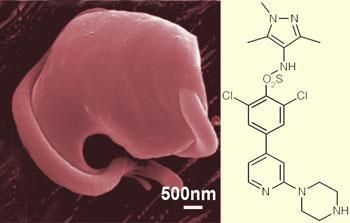 Rob Leurs, from VU University Amsterdam in the Netherlands, who heads an international consortium investigating sleeping sickness and related diseases such as leishmaniasis, agrees that NMT is a potentially interesting target. ’The paper shows an excellent combination of chemistry & biology, at the level of the target, in vitro cell culture and in vivo preclinical models,’ says Leurs. However, he adds that there is still a lot of work to do to convert the lead into a viable drug, particularly working out the toxicity and the likelihood of the parasite developing resistance. ’But these are the standard issues in drug discovery,’ he says.

However, Wyatt is confident that it can be done: ’we’ve got several projects going to try and solve those problems,’ he says. ’But what we have now is validation that a good NMT inhibitor will do what we want as an antiparasitic.’ The team’s studies in mice also suggest that they can selectively target parasitic NMT. They found they could completely cure infected mice within a few days - albeit at reasonably high doses, but Wyatt stresses that these compounds are only a starting point. He adds that it will be at least 18 months to two years before a molecule is likely to start clinical trials.

One of the key advantages of such a drug would be the ability to take it orally. Current sleeping sickness drugs are all administered by injection and have major drawbacks - melarsoprol, an arsenic derivative, kills about one in 20 patients and has a raft of nasty side effects; whereas eflornithine, which is less toxic, requires four two-hour intravenous infusions a day for two weeks. ’This is obviously not ideal in the developing world,’ says Wyatt.