Route to fiendishly complex marine molecule cut in half 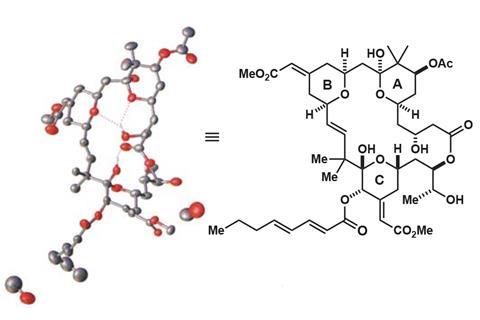 Difficulty synthesising bryostatin 1 is limiting investigation of its therapeutic benefits. The new route to produce could help to change this

The total synthesis of bryostatin 1 – a compound that is in trials to treat Alzheimer’s and HIV – has been substantially shortened and simplified. The new route can produce grams of the scarce marine natural product and can be scaled-up to meet clinical needs.1 The synthesis also offers researchers a way to prepare new analogues of the molecule that could have other therapeutic uses.

Bryostatins are a family of natural products consisting of large macrocyclic lactone rings. They are produced in tiny amounts by a bacterium that lives inside small aquatic animals – called bryozoans. Bryostatins were discovered almost 50 years ago and have been of intense interest to scientists thanks to their therapeutic promise. These molecules can activate protein kinase enzymes, which play an important role in many signal–transduction pathways. Bryostatin 1 is now in clinical trials for Alzheimer’s disease and HIV/Aids. It is also being investigated as an anti-cancer compound, showing promising results in animal studies, but suffered from poor results in human clinical trials.

Bryostatins are, however, very scarce. Fortunately, the compounds are exceptionally potent – a single gram is enough to treat hundreds of patients – so very little needs to be harvested. This is just as well as, when the US National Cancer Institute (NCI) went hunting for bryostatins in 1991, 12.7 tonnes of the bryozoan only yielded 18g of the compound. After nearly half a century of investigating these compounds, the amount available for clinical studies is still tiny. Most of the approaches to solving this supply problem, including the use of supercritical carbon dioxide to extract the compound from its marine source, aquaculture and engineered biosynthesis, are either environmentally questionable, expensive or still at an early stage. Chemical synthesis still seems the best option, but bryostatins are complex and structurally challenging so the synthetic routes to these molecules are long.

‘Total syntheses of natural bryostatins have impressively improved, and a noteworthy synthesis of bryostatin 1 has been reported, requiring 57 steps,’ says Paul Wender at Stanford University, US, who led the study. ‘We now report a convergent 29-step synthesis that produces multi-gram quantities of bryostatin 1.’ The new approach considerably shortens the synthesis of bryostatin 12 and is also an improvement with respect to other important synthetic efforts.3 ‘Just when everybody in the community thought that it would be difficult to get a shorter, more efficient and more practical synthesis of a bryostatin macrolide than Krische’s elegant 36-step pathway to bryostatin 7, Wender’s team have now shown that they can actually synthesise its more biologically potent congener, bryostatin 1, in just a mere 29 steps,’ says Karl Hale, who works on synthetic and bio-organic chemistry at Queen’s University Belfast, UK. 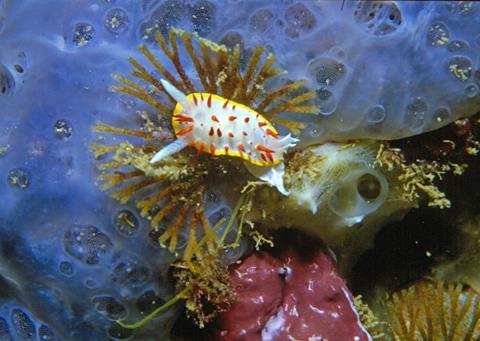 Bryostatin 1 is a complex natural product. Its macrocyclic structure contains three hydropyran rings, 11 stereocenters and an imposing number of chemical groups. ‘Two teams working in parallel created routes to two fragments of bryostatin and then in a two-step sequence brought these fragments together in a Prins macrocyclisation that we had introduced in an earlier synthesis.4 Four steps later, brysotatin 1 was in hand,’ Wender says. Using several analytical techniques, the researchers could show that the synthesised product was identical to a natural sample supplied by the NCI.

‘What makes Wender’s bryostatin 1 synthesis stand out is the fact that it is largely stereo-controlled and efficient, with no step proceeding in a yield that is less than 75%,’ Hale says. ‘The final 2g quantity of natural product that they have prepared is simply breath-taking and can now lead to this molecule being clinically evaluated as a potentially revolutionary anti-Alzheimer’s drug in close to 2000 patients.’

‘Every step in a synthesis must be successful if the whole effort is to succeed,’ Wender says. ‘It takes special co-workers to make that happen. My co-workers were sensational. Through creativity, grit and effort they produced a solution to the clinical supply problem and simultaneously enabled access to new analogues.’