At the start of July hundreds of scientists in white coats carried a coffin along Leninsky Prospekt street in Moscow to the main building of the Russian Academy of Sciences (RAS). The coffin, bearing the inscription ‘Russian science’, was part of a symbolic funeral to demonstrate against plans to merge the RAS with the previously independent Academy of Medical Sciences and Academy of Agricultural Sciences. The protests saw several scientists arrested for public order offences on the day, but all were later released without charge.

The reforms will see the country’s state academies reorganised by a government decree authored by Dmitry Medvedev, Russia’s prime minister, and Dmitry Livanov, the education minister. ‘The reform is acutely needed, taking into account that at present there are six state science academies in the country,’ said Medvedev. ‘Despite the fact that they are currently involved in important research, their management system was developed as far back as in the 1930s and 1940s, under the influence of subjective factors that, of course, do not fully meet the modern challenges of the country’s development.’

In a statement, the government claimed that the current system is plagued by a lack of coordination, particularly in managing their finances and buildings and infrastructure. The initial stages of the reforms are expected to cost RUB500 million (£10 million), although this may later rise.

One of the most controversial details of the reforms, which have sparked fury from scientists, involves the transfer of property owned by the academies to a specially created state agency. Medvedev said that freeing up the RAS from managing infrastructure will be beneficial for Russian science, letting researchers focus on their work. Zhores Alferov, the 2000 physics Nobel prize winner, calls the initiative ‘a complete disgrace’. ‘Russian science needs only one thing – demand from business and society,’ he says. ‘The forthcoming reform will not provide such demand, but instead will kill science. The only goal of this reform is to take away all the property of the Russian Academy of Sciences.’ 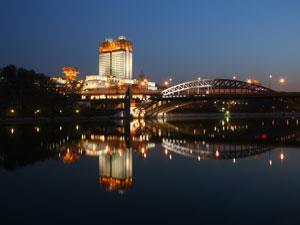 As part of the reform many small scientific institutions, which are today part of the Russian Academy of Sciences, will be abolished or merged with other institutions. The reforms will also see a new charter drawn up for the academy, presidential elections and the establishment of a new secretariat. Academy presidents will also only be restricted to a maximum of two terms. The current president of the academy, Yuri Osipov, has held his post since 1991.

The Communist Party and other Russian opposition parties have condemned the reforms. The Communists warn that the reforms will result in an exodus of young scientists or even the wholesale loss of labs and institutions to other countries.

Irina Baklushinskaya, at the Koltzov Institute of Developmental Biology, says the reforms are merely a cover for the latest efforts to undermine the RAS, which has been independent for the last 300 years, and has supported human rights dissidents such as physicist Andrei Sakharov, which angered past governments. According to her, this not the first attempt to destroy Russian science’s indepedence. The most recent ‘attack’ took place several weeks ago and involved a ban on domestic scientists accepting overseas grants or risk falling foul of a law that would label them a ‘foreign agent’ – someone working against the interests of the country.

Critics of the reforms also point to the haste with which they are being enacted. They claim that they’re being pushed through during the holiday period in the hope of avoiding more widespread confrontation on the issue. Vladimir Shevchenko, an academic at the RAS’s Institute of Silicate Chemistry, says: ‘Some of our lawyers found out that the law is in violation of the rules required for its consideration, as the draft of the law should be sent for the Council for Science and Education of the Ministry of Education for 60 days, but none of this has been done.’

However, despite criticism from scientists, the State Duma passed the bill on 7 July at the second reading. The reforms are expected to be enacted after the third and final reading of the bill in September.