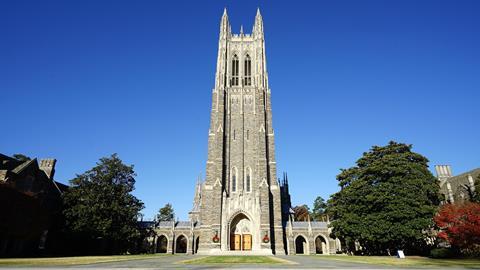 The US government’s biomedical research agency, the National Institutes of Health (NIH), has agreed to remove grant restrictions that it imposed on Duke University in North Carolina in early 2018 amid very public allegations of scientific misconduct and safety lapses. These sanctions had required, for example, that Duke researchers applying for NIH grants with annual budgets of less than $250,000 (£190,000) submit a detailed proposed budget, and that they obtain explicit permission from the NIH before extending grant budget periods or transferring any leftover funds into the next budget period.

Lawrence Carin, Duke’s vice president for research, announced on 22 November that the special award conditions imposed more than a year-and-a-half ago would be lifted ‘effective immediately’, in a memo to the Duke community obtained by Retraction Watch. He said that this is ‘excellent news’ reflecting the NIH’s restored confidence in Duke, but noted that it is contingent on the university completing the remaining commitments detailed in its plan before the start of the new year. Duke’s progress thus far includes creating a new university-wide Office of Research led by the vice president for research, and establishing a new faculty committee to evaluate and make recommendations on strengthening administrative processes, reducing administrative burdens and fostering scientific integrity.

Carin said there will be a short ‘phase-in period’ to adjust to the new workflow processes with the NIH, and he noted that there will be additional guidance for grant managers. ‘It is clear that the NIH will be watching to make certain that Duke maintains its emphasis on research culture and accountability with respect to NIH policies,’ Carin wrote.

In March 2018, the NIH suspended seven research grants to Duke due to concerns about research misconduct, patient safety, as well as indications of inadequate internal controls and oversight over NIH grant funds. Previously, Duke had notified the agency in December 2017 about allegations of research misconduct against several investigators in the university’s psychiatry department – including Anil Potti and Erin Potts-Kant – as well as potential clinical research irregularities such as inadequate adverse event reporting.

The NIH placed the research grant restrictions on Duke in March 2018. In addition, the university was required earlier this year to pay the US government more than $112 million to settle a lawsuit alleging that the university received hundreds of millions of dollars in research grants based on doctored data.

In 2015, the US government’s Office of Research Integrity (Ori) found that Potti, a former cancer researcher who resigned from Duke in late 2010 after being placed on administrative leave, engaged in research misconduct by including falsified research data in several published papers, which were retracted as a result. Potti later reached a legal settlement whereby he neither admitted nor denied Ori’s findings of research misconduct. He now works at the Cancer Center Of North Dakota.

In October, Potts-Kant voluntarily agreed to never apply for federal research funds again, after being found to have intentionally falsified and fabricated research data in dozens of scientific papers, many of which were later retracted. Duke fired Potts-Kant in 2013, after her arrest on charges of embezzling research funds from the university.