Despite President Obama's plan to freeze domestic spending, science agencies would get a boost under new budget proposals

US science agencies would fare quite well under President Obama’s newly unveiled budget proposal for fiscal year 2011, despite his plan to reduce the nation’s trillion-dollar deficit by freezing non-defence discretionary spending. The move reinforces the message that science is one of his top priorities, observers say.

The president’s budget request, released on 1 February, would bolster the US government’s overall investment in non-defence research and development (R&D) by $3.7 billion (?2.3 billion) to $66 billion, which amounts to almost a 6 per cent increase.

"The president was able to find money for science in a very tight budget. It’s hard to be disappointed" - Patrick Clemins, American Association for the Advancement of Science

’Given the president’s announcement last week that domestic discretionary funding would be frozen at FY10 levels, we are very heartened by the increased science and education funding levels provided,’ says the American Chemical Society’s Glenn Ruskin.

Discretionary spending, which generally includes research agency budgets, is negotiated between the president and Congress each year, as opposed to mandatory spending which is dictated by law. 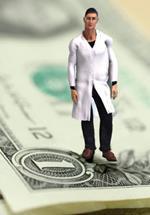 Specifically, the White House plan would provide the National Science Foundation (NSF) with an 8 per cent funding jump - increasing the agency’s budget to $7.4 billion. The proposal would also supply ongoing funding to triple the number of NSF graduate research fellowships to 3,000 by 2013.

Moreover, Obama’s budget makes good on his promise to double R&D funding at three key physical sciences agencies - NSF, the Department of Energy’s Office of Science (OS), and the National Institute of Standards and Technology (NIST) laboratories. Under the plan, OS would receive a 4.6 per cent increase to $5.1 billion, and NIST would get a boost of nearly 7 per cent to $709 million.

Patrick Clemins, director of the R&D budget and policy programme at the American Association for the Advancement of Science, is encouraged by the news. ’The president was able to find money for science in a very tight budget,’ he tells Chemistry World. ’It’s hard to be disappointed’.

The president’s request for the National Institutes of Health (NIH), however, has elicited some concern from the research community. He proposes to fund the biomedical research agency at $32.1 billion, which represents an increase of $1 billion, or 3.2 per cent. The figure pales next to the 19 per cent increase advocated by the Federation of American Societies for Experimental Biology (FASEB).

FASEB and others argue that such a sum is necessary to maintain momentum generated by the extra $10 billion NIH received under last year’s economic stimulus bill, which was to be spent in FY09 and FY10. Now that these stimulus funds have dried up, there is concern that a sudden drop-off could lead to a loss of research jobs and projects.

’We have generated this incredible capacity. There are great ideas out there and a lot of momentum, and we want to make sure that doesn’t fall off the cliff,’ FASEB’s Carrie Wolinetz tells Chemistry World.

She acknowledges, however, that this is the first time in years that the White House has proposed to increase NIH’s budget above inflation. ’It is very gratifying to see that NIH was a big enough budgetary priority to be exempted from the freezing strategy,’ Wolinetz states.

The head of NIH’s umbrella agency - the Department of Health and Human Services (HHS) - defended the NIH funding proposal: ’there is no question that more is always more,’ acknowledged HHS Secretary Kathleen Sebelius. She emphasised that some of the extra funding allocated to NIH through the stimulus bill has gone to multiple-year endeavours, like construction projects.

’The $10 billion is spread over a long period of time, and this [FY11 proposal] is an additional billion in research dollars over and above that very critical investment,’ Sebelius stated.

The budget for FY11, which begins on 1 October, remains a work in progress. The Senate and House must each develop their own funding bills and then reconcile them before any legislation can be forwarded to Obama and become law. In the meantime, science advocacy groups like FASEB and Research!America plan to lobby lawmakers.