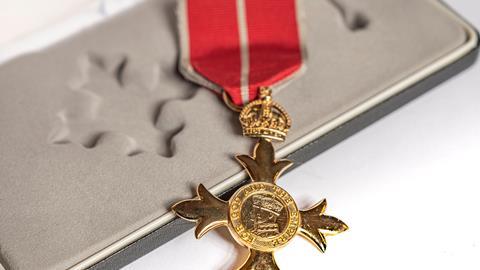 A number of researchers have featured in the UK’s 2022 New Year’s Honours list, recognising their contributions to science.

In a statement, Royal Society of Chemistry (RSC) chief executive Helen Pain highlighted Karodia’s work inspiring early career chemists, and Mokaya’s involvement in the Pan Africa Chemistry Network – an RSC-led project to support chemists across Africa. ‘Like many members of the Royal Society of Chemistry, our relationships with Nazira and Robert stretch back many years, so it feels genuinely meaningful to see them in the spotlight this year,’ she said.

Among other scientists featured in this year’s list, Paul Nurse, a geneticist who shared the 2001 Nobel prize in medicine for research on the genes and proteins involved in cell division, was made a Member of the Order of the Companions of Honour. Nurse was previously knighted in 1999.

The UK government’s chief scientific adviser Patrick Valance was made a Knight Commander of the Order of the Bath (KCB), having previously been knighted in 2019’s honours list.

Robin Grimes, who serves as the Ministry of Defence’s chief scientific adviser on nuclear technology, has been granted a knighthood for ‘services to UK resilience and international science relationships’.

612 women were recognised in this year’s honours list, representing 48% of those receiving awards. However, women only account for 36% of awards at CBE level or above.