Scotland's 'no' vote pleases much of the science community 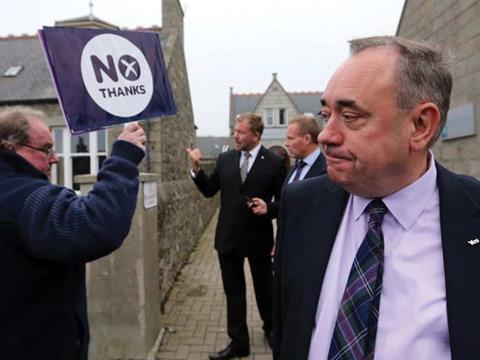 Many in Scotland’s scientific community were united in relief after last week’s referendum resulted in the rejection of independence. Warnings had circulated of a potential academic brain drain and a loss of funding from the research councils, from which Scottish researchers win a larger share of funding per capita than the rest of the UK.

‘For me, there simply wasn’t a strong enough guarantee that Scotland would be willing or allowed to buy into UK and EU structures,’ says Rob Ellam, director of the Scottish Universities Environmental Research Centre (SUERC). ‘I know of at least one English university department that had a list of potential recruits following a “yes” and another that even told us that they would target NERC [Natural Environment Research Council] funding that they expected SUERC to lose.’

Academics are used to disagreement – it’s what we do

In 2012–13 Scotland’s researchers won £307 million funding from Research Councils UK (RCUK) – 13% of the UK total for a population of just 8.4% of the UK total. In addition, the Department for Business, Innovation and Skills (BIS) allocates funding in proportion to grants won from RCUK. A ‘yes’ vote would also have thrown into question Scotland’s continuing membership of the EU and hence its ability to access €79 billion (£62 billion) of Horizon 2020 funding.

However, among academics who argued for independence, concerns remain for the future of university research according to Andrew Watterson, director of the Centre for Public Health and Population Health Research at the University of Stirling. He says funding ‘could well be threatened further in the middle term because of UK cuts… The yes campaign will not be going away in the universities or anywhere else.’ He argues that ‘without control of the economic levers, the Scottish government is likely to find it harder to protect higher education’.

An opinion poll conducted in August for the Times Higher Education suggested that the majority of Scotland’s academics wanted to remain part of the UK, but showed that they were deeply divided by discipline. Almost 70% of those in science, technology, engineering and maths disciplines were intending to vote ‘no’, compared with 43% in arts and humanities.

‘I am pleased for the Scottish scientific research base that it was a ‘no’ vote, as we are, in my opinion, much better together as part of the UK for depth of research governance and depth of resources,’ says Mike Ferguson, dean of research for the college of life sciences at Dundee University. The university is located in one of just four councils, out of 32, that voted for independence. ‘There are powerful messages from the closeness of the vote and the concentration of the “yes” vote in cities with deprived communities, like Dundee, showing a clear demand for change,’ Ferguson adds. ‘I hope that will send a wake-up call to all politicians. The important thing now is for ‘yes’ and ‘no’ voters to look to the future and work together to address those social issues and, as scientists, to do what we can for the communities we have the privilege of living in. ‘

Ellam believes the academic community will not be riven by dissent over independence though. ‘Academics are used to disagreement – it’s what we do.’

However, the commitments made to further devolution may mean the status quo does not prevail. Academics for Yes, which Watterson supports, had called for a science fund for Scotland which would see 1% of oil production revenues invested in R&D. There have also been suggestions that Scotland should have its own research funding council to direct policy, and more devolution from BIS.

Ellam hopes any political pressure to revisit the Barnett formula, under which public spending is set for Scotland, Northern Ireland and Wales, will not affect science.

In letters to both Scotland’s first minister and to the prime minister, the Royal Society of Edinburgh urged a ‘period of mature reflection’ from both camps, while Paul Nurse, president of the Royal Society welcomed the referendum result as ‘a good one for the future of Scottish and UK science’.