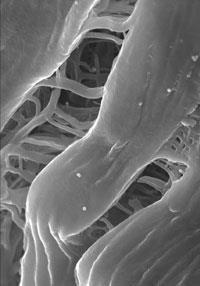 A sudden stiffening of the skin can help the humble sea cucumber defend itself from predators. Now, scientists in America have designed a new composite material that mimics this feat. Christoph Weder, Stuart Rowan and colleagues at Case Western Reserve University in Cleveland, Ohio, say that their invention could be useful for biomedical applications.

The sea cucumber - a relative of the starfish that grazes the ocean floor for carrion - can become rigid in seconds, thanks to its ability to control the interaction between collagen fibrils in its tissue. The researchers tried to imitate this with a network of cellulose nanofibres, dubbed ’whiskers’, and embedded them into a rubbery polymer substance.

’But if the material is exposed to water, the water molecules "unglue" the nanofibers and the material becomes about 1000 times softer, so its properties resemble those of a soft rubber.’

’I think it is one of the most exciting recent opportunities in the design of new materials, and would open the door to applications in a number of different fields,’ says Craig Hawker a materials scientist at the University of California, Santa Barbara, US. ’This could radically change the way scientists think about nanomaterials - it could be game-changing.’

The scientists think that the switchable material could be used in microelectrodes that are implanted into the brain to treat diseases such as Parkinson’s, which could be made to go soft in the aqueous environment of the body and thus avoid scarring.

Experimenting with the composition of the material, the scientists also created a composite substance that can be switched by temperature changes, and they hope to find others where the same change can be induced by chemical or electrical signals.

’One can imagine protective clothing, for example, which is flexible and comfortable to wear but becomes rigid and protective when necessary,’ adds Hawker. ’This is essentially what sea cucumbers use this process for.’