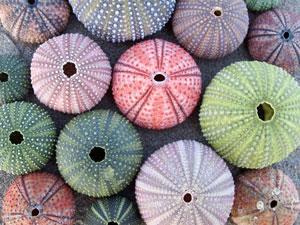 UK scientists have taken inspiration from the sea urchin and shown how nickel nanoparticles could be a cheap and re-usable catalyst in a key step for capturing carbon dioxide produced by power plants and the chemical industry.

Carbon capture and storage (CCS) typically involves separating CO2 from flue gases and then either storing it in saline aquifers or converting it into mineral carbonates, including calcium carbonate, the main component of egg shells, marine organism shells and the sea urchin exoskeleton. In the latter, the mineralisation process is deemed a more reliable maintenance-free solution to the problem of CO2 storage.

Gaurav Bhaduri and Lidija Šiller at the University of Newcastle, UK have discovered that nickel nanoparticles can catalyse the hydration reaction that turns CO2 in water into carbonic acid – a crucial step for separating CO2 for the mineralisation process. They made the discovery after they found high concentrations of nickel ions on the surface of sea urchin larvae, suggesting that nickel plays a role in forming the sea urchin's exoskeleton.

Currently, industry uses amines to separate CO2 but this approach is not energy efficient. Other studies on CCS mineralisation have used the enzyme carbonic anhydrase, which works in a similar way to nickel nanoparticles. However, the enzyme is sensitive to pH and the extraction and purification process is costly.

The next step, Šiller says, would be to mineralise carbonic acid to environmentally friendly solid minerals including magnesium carbonate, calcium carbonate and dolomite, which could be used as a building material.  'The current challenge that we are addressing is to quantify the process. We would like to determine the reaction kinetics and exact yields. Once we have this information we plan to do a small continuous process in a lab-scale pilot plant.'

However, there are doubts that this is a significant breakthrough for CCS. 'This work represents an incremental addition to CO2 capture where the catalytic dimension is relevant,' comments Mark Keane, who investigates catalysis engineering at Heriot-Watt University in Edinburgh, UK. 'True innovation, however, should harness catalytic action in the conversion of CO2 to high value products, such as carbamates.'