A giant, self-assembling chemical sphere which researchers call a ‘buckybowl’ has finally been created 12 years after the team first came up with the idea.1

Finding a way to make self-assembling regular spheres has been on supramolecular chemists’ wish list for a long time. To do that, you need to be able to make regular, convex polyhedrons. Two shapes – the icosahedron and dodecahedron – are the most sought after of the five platonic solids, as they have the closest symmetry to a perfect sphere. The ability to self-assemble large supramolecular spheres could give researchers new ways of delivering drugs, encapsulating compounds and catalysing reactions. 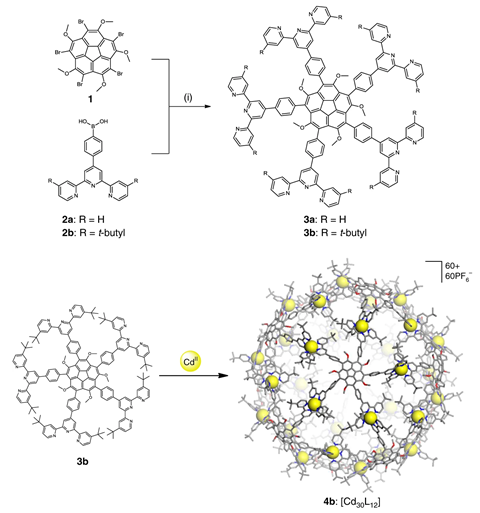 In 2007, researchers from the The Scripps Research Institute in California came up with a way to do just that.2 Inspired by the capsids of viruses, they proposed a way to make a ‘buckybowl’ based on the self-assembly of 12 bowl-shaped, corannulene-based building blocks. However, researchers ran into solubility problems when it came to actually making them. This made it difficult to maintain homogeneity in solution, which in turn prevented the building blocks from assembling into spheres.

Now, the same team has managed to create a self-assembling chemical capsid. The skeleton of the sphere, which has a thickness of 1nm and a diameter of nearly 6nm, is composed of 12 corannulene molecules coordinated to cadmium ions. By switching to corannulene derivatives with five ether functions and five terpyridine ligands, the team were able to increase solubility to the point where self-assembly of spheres took place. The bowl shape of the corannulene molecules makes the building blocks of the sphere chiral, and when complexed by cadmium, they’re locked into one enantiomeric form. As a result, the buckybowl is chiral.