Weyl fermions – massless quasiparticles that carry charge in materials without having counterparts in empty space – explain otherwise inexplicable features of the magnetism in the semimetal neodymium aluminium silicon, researchers in the US believe. Although these ghostly phenomena were first observed in 2015, the researchers’ work suggests Weyl fermion-mediated interactions can affect a material’s bulk properties.

In most materials, electrons behave as massive particles, making them subject to the Schrödinger equation of non-relativistic quantum mechanics. In materials like graphene, however, they can propagate as though their mass is zero. Their motion then obeys the Dirac equation of relativistic quantum mechanics instead. The Dirac equation can also allow solutions with properties different from the electron and its antiparticle, the positron. One of these is the Weyl fermion – a massless particle which is its own antiparticle.

A Weyl fermion has never been observed in empty space. In 2015, however, two groups in the US and one in China independently observed Weyl fermion-like quasiparticles as collective excitations of electrical charge in tantalum arsenide and as microwaves in a photonic crystal. Weyl fermions have subsequently been shown to cause exotic electrical effects in several other materials. However, evidence for collective effects associated with Weyl fermions is sparse: ‘All the efforts to understand the anomalous quasiparticles are fantastic and very exciting, but [the Weyl fermions] are just sitting there being strange, and we want to see what they can do when they get involved in a correlated, collective phenomenon,’ says Collin Broholm of Johns Hopkins University, who led the experimental work. 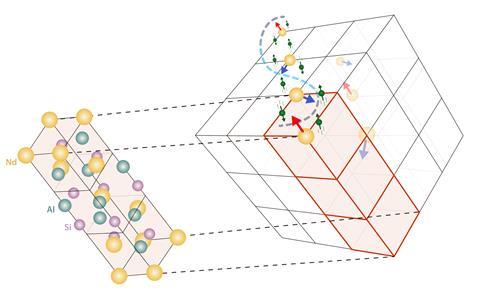 This semimetal crystal consists of repeating unit cells such as the one to the left, which has a square top and rectangular sides. The spheres represent silicon (violet), aluminium (turquoise), and — in gold — neodymium atoms, the last of which are magnetic. Understanding the special magnetic properties of the material requires nine of these unit cells, shown as the larger block to the right (which has a unit single cell outlined in red). This 3x3 block shows green “Weyl” electrons traveling diagonally across the top of the cells and affecting the magnetic spin orientation of the Nd atoms. A special property of the Weyl electron is the locking of its spin direction, which either points parallel or antiparallel to the direction of its motion, as represented by the small arrows in the Weyl electrons. As these electrons travel along the four gold Nd atoms, the Nd spins reorient themselves into a “spin spiral” which can be imagined as pointing successively in the 12 o’clock direction (closest to viewer with red arrow pointing upward), 4 o’clock (blue arrow), 8 o’clock (also in blue) and again 12 o’clock (farthest from viewer and again in red). Lines of Nd atoms stretch through many layers of the crystal, offering many instances of this unusual magnetic pattern

The crystal lattice of neodymium aluminium silicon breaks inversion symmetry (one side of its unit cell is different from the other). This makes the material a Weyl semimetal, explains Broholm, in which electric charge is ‘predominantly’ carried not by electrons but by Weyl fermions. Crucially, Weyl fermions also mediate the magnetic interaction between adjacent neodymium atoms. Whereas the spin of an electron is independent of its motion, Weyl fermions are subject to ‘spin-momentum locking’. ‘A conventional electron is able to travel from site A to site B with its spin pointing in any direction,’ explains Broholm. ‘In order to travel from site A to site B, [a Weyl fermion]’s spin has to point either from site A to site B or in the opposite detection. That very strongly constrains the nature of the interaction mediated between the neodymium atoms.’

Neutron diffraction experiments at the National Institute for Standards and Technology revealed that, above 14 K, the neodymium spins are disordered, producing no permanent dipole moment. Below this, however, they spontaneously form a spiral pattern with a wavelength unrelated to the underlying crystalline lattice dimensions, producing an exotic magnet called a helimagnetic. ‘These exotic quasiparticles actually give rise to a collective phenomenon, which is a phase transition,’ explains Broholm. He says that spatial modulations have been seen in the magnetism of other rare earth intermetallic compounds in the past, and hopes that the present results may help to explain these.

Physicist Zahid Hasan of Princeton University in the US, who led one of the groups that first observed the Weyl fermion, says that ‘it is interesting to see that neutron scattering is being applied to explore magnetic Weyl semimetals, which were previously discovered using other techniques’. He notes that, although this study does not reveal anything inherently new about their nature, ‘further application of neutrons to explore these materials may reveal new phenomena in future experiments’. He is reluctant, however, to decisively attribute the phenomena observed here to Weyl fermions: ‘There is no clear evidence yet regarding the claim that this material is a Weyl magnet,’ he says.