US scientists have designed a calorimetric sensor as a point-of-care diagnostic instrument that can detect low levels of glucose compared to similar sensors.

Calorimetric sensors can detect minute heat changes released during biological reactions so could be used to measure trace amounts of clinically relevant biochemicals, such as glucose and urea. But, until now, designing these sensors has been complex and unreliable and the sensors produced have not been robust enough for practical use. 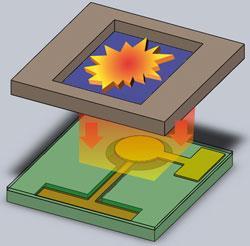 A reaction between glucose and an enzyme takes place in the chamber placed above the sensor, which detects heat given off by the reaction. The amount of heat corresponds to the amount of glucose

Srinivas Tadigadapa and colleagues at Pennsylvania State University have designed a sensor in which the heat detector - a quartz resonator that picks up vibrations caused by heat - is contained in a metal plate and a disposable reaction chamber is placed on top. Keeping the chamber separate from the sensor ensures that the sensor doesn’t get polluted by reaction materials that decrease its sensitivity and alter results.

To test the sensor, the team immobilised the enzyme glucose dehydrogenase in the reaction chamber. They fed glucose into the chamber, which reacted with the enzyme giving off heat. The heat reached the resonator by radiation and conduction and with the chamber being close to the resonator, glucose levels less than 10uM could be detected.

They team used the sensor to detect urea levels in a similar way. They also used it to measure the decay of pancreatic cancer cells over time by adding different levels of cell killing calcium ionophores. The heat given off by the reaction of the calcium interacting with the cells was measured. ’We have shown that a calorimetric sensor can be configured in a very simple fashion allowing for quantitative measurement of biological molecules of interest in a simple, easy to use method,’ says Tadigadapa.

Ming Zhou, an expert in biosensors at the University of California, San Diego, US, says: ’Such a sensor allows a variety of measurements, ranging from neutralisation to enzymatic reactions and cellular activity with dramatically improved performance in comparison with previous thermopile and thermistor based [heat measuring] devices.’