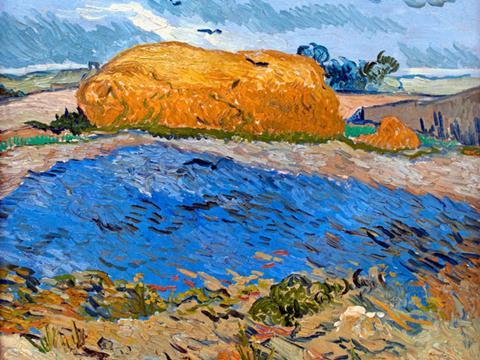 The vibrant red leaves on the pond in Vincent van Gogh’s Wheat stack under a cloudy sky are slowly transforming into the colour of the clouds above. Now, scientists in Belgium may have found the missing chemical link to explain why these reds are turning white.

During his most prolific period, Van Gogh produced 2000 paintings over a decade and was known for his use of intense colours, which, some say, reflected his complex personality. However, many of the painter’s most celebrated works have been degrading due to exposure to light.

‘Normally, the idea is these paintings are there for a hundred years, or five hundred years, and they’re static – nothing really changes,’ says Koen Janssens from the University of Antwerp, Belgium. ‘But the opposite is actually true when you look in detail.’

Red lead or minium (Pb3O4), thought to be one of the earliest synthetically produced pigments in antiquity, was used extensively by Van Gogh in his paintings. Scientists have known that minium ‘whitens’ under light but have not been able to determine why. 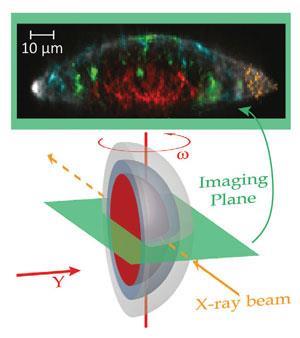 To understand this process, Janssens and his colleagues examined a minute white globule taken from the surface of the pond in Van Gogh’s 1889 piece a Wheat stack under a cloudy sky using x-ray powder diffraction tomography. By firing a focused beam of x-rays at the sample from different positions, they were able to gather information on the chemical species present.

‘[It is] an enclosed little world,’ explains Janssens. ‘The minium is changing and the products [are] captured below the surface of the paint.’ He goes on to add that the red lead is at the grain’s centre and, over the years, it has become coated with degradation products.

‘Starting from minium, we found plumbonacrite (3PbCO3.Pb(OH)2.PbO), which is a very exotic mineral of lead,’ says Janssens. ‘More towards the outer parts of this sample we found the more commonly known carbonates, hydrocerussites (2PbCO3.Pb(OH)2) and cerussites (PbCO3).’

The cerussites are a family of compounds that form the white outer shell around the minium but plumbonacrite has never been detected before in a pre mid-20th century painting. Janssens calls this rare mineral the ‘missing link’ and the team are now able to propose a chemical pathway for the photochemical degradation of minium. The researchers think that when red lead is exposed to light it is converted into plumbonacrite, which reacts with carbon dioxide to form hydrocerussite and cerussite.

‘It’s a very important [piece of research],’ says Philippe Walter, director of the Laboratory of Molecular and Structural Archaeology in France. ‘For the conservation of works of art, it is important to look at this phenomenon to be sure to take care about the quantity of light [in museums].’