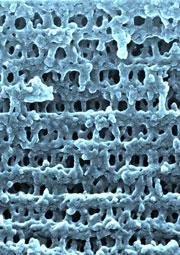 Nanoporous materials have become important for many emerging applications. Their high surface area makes them ideal for catalysis, while the compact structure of their pores can make them excellent for photonics or water filtration. However, the manufacture of nanoporous materials is not always straightforward. One component of a material - the one that becomes the pores - needs to be removed, and to make this possible it must be connected throughout the structure, as well linked to the outside.

Now, Easan Sivaniah from the University of Cambridge and colleagues have devised a method where the minor component of a material does not have to be linked up, inside or outside, to be removed. To demonstrate their method, the researchers used polystyrene filled with tiny spheres of polymethyl methacrylate (PMMA). They then exposed the composite material to ultraviolet light, which broke the PMMA down into its constituent oligomers, forming small domains.

In the next, crucial, step, the researchers wetted the material with acetic acid, which dissolves PMMA. Although the acetic acid couldn’t reach the PMMA oligomers directly, it could diffuse through the polystyrene via osmosis, gradually filling up the PMMA domains. Eventually, the domains grew so big from the absorbed acid that they broke through the walls - a process known as collective osmotic shock - leaving the polystyrene full of nanopores. ’With optimisation this could be applied to continuous industrial processes, enhancing the applicability of the technique,’ says Sivaniah.

The researchers have already demonstrated that the nanoporous polystyrene can function as both a water filter that can remove dye, and a one-dimensional photonic crystal. Sivaniah says that different nanoporous materials could even be made using a ’plaster cast’ approach, by filling the polystyrene nanopores with another substance, and then dissolving away the polystyrene.

Martin Attfield, an expert in nanoporous materials at the University of Manchester, UK, says the work is an ’elegant and novel’ way of using osmotic shock. ’The reported materials are formed from relatively inexpensive reagents, and are highly applicable for a diverse array of applications and as templates to form a host of other materials made from other elements,’ he adds. ’All these aspects indicate the great potential for this methodology to provide new materials that may enhance the performance of, or replace, existing systems.’