Chemists in the UK have constructed a structural analogue of benzene made from silicon atoms. The molecule is not flat like benzene, but it reveals a new type of aromatic stabilisation.

The team, led by David Scheschkewitz and Henry Rzepa from Imperial College London, were attempting to make three-membered silicon ring compounds, but after the final reduction step they isolated dark green crystals mScheschkewitz explains that this immediately suggested that they had a compound with some delocalised bonding, since saturated silicon compounds are usually colourless.

The team found that they had made a compound with six silicon atoms joined in a chair-shaped ring system. The crystals are unusually stable, Scheschkewitz says, ’they’re stable in air for short periods, and we can heat them to 200?C without decomposition, which is quite remarkable.’ This led them to look at the possibility of some aromatic stabilisation of the silicon ring. 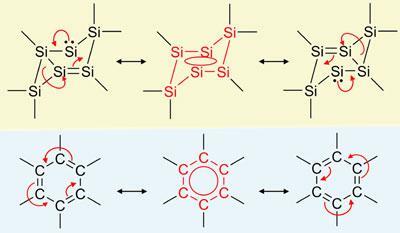 Calculations revealed that there was some aromaticity, but not in the conventional sense. Rather than a flat structure with electrons being delocalised in six of the same kind of orbital - as in carbon-based benzene - the aromatic delocalisation is only around the central four silicon atoms that make up the ’seat’ of the chair-shaped ring. Rzepa explains that the six delocalised electrons come from a mixture of a single (sigma) bond, a double (pi) bond and a non-bonding ’lone pair’. As the delocalisation can be thought of as these three sets of electrons constantly interconverting, Rzepa has dubbed this concept ’dismutational aromaticity’.

’Although the concept of aromaticity involving different types of electrons (pi, sigma, lone pair) is not entirely new, its experimental realisation is a big step towards the synthesis of stable 6-pi-electron persilaaromatics,’ says Akira Sekiguchi, whose group at the University of Tsukuba, Japan, has been instrumental in research into unsaturated silicon compounds.

Rzepa notes that the carbon-based analogue of this silicon compound does appear on the potential energy surface as a viable structure, but at a much higher energy than the benzene structure and therefore is unlikely to ever be made. ’And yet here, for silicon, it’s easier to make than the benzene structure. What is stable and normal for carbon is unstable for silicon, and by the same token what is unstable for carbon is stable for silicon. It’s like an upside down world,’ he adds.

Scheschkewitz points out that their compound differs from the benzene structure in that some of their silicon atoms have two substituent groups and some have none, rather than each having one group attached. ’With a different precursor it might be possible to make a true hexasilabenzene,’ he adds, ’and if we can do it that would be marvellous.’

’Hexasilabenzene is one of the most challenging silaaromatic molecules,’ says Sekiguchi. ’It has been well-studied computationally, but still eludes experimental isolation, therefore the discovery of this structural isomer is of undoubted importance.’