Siligraphene gets serious about solar cells 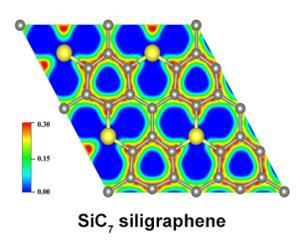 Theoretical scientists have predicted SiC7 – a new phase of the graphene–silicene hybrid siligraphene, which if synthesisable, could revolutionise flexible optoelectronic devices such as solar cells.

The semimetallic nature of graphene, as well as its silicon counterpart silicene, significantly restricts its widespread use in nano-electronics. Now, calculations from a team led by Youyong Li at Soochow University, China, and Liujiang Zhou at the University of Bremen, Germany, have put forward a new 2D semiconductor material made from carbon and silicon.

SiC7 siligraphene has an interesting structure with a graphene-like honeycomb lattice, but unlike graphene, its hexagonal rings are irregular. The scientists expect SiC7 siligraphene to be much better than SiC2 siligraphene and single-layer black phosphorus at absorbing sunlight. Additionally, broken symmetry caused by silicon doping would create band gaps that boost its optoelectronic properties.