Researchers in Sweden and Spain have created transistors woven from modified silk fibres. The breakthrough bodes well for a new generation of electronic circuits that can be incorporated into fabrics or inserted into biological environments.

Conventional electronics are printed onto hard substrates, but many researchers are looking at ways to offer, literally, more flexible applications. Some are developing methods to print directly onto fabrics, while others are examining how to make individual fibres into circuit components.

Olle Ingan?s and colleagues from Link?ping University and the Biomedical Centre in Sweden and the Centre for Electrochemical Technologies, Spain, are doing the latter. In the past six years Ingan?s’s group has shown how to make silk fibres from the silkworm Bombyx mori into semiconductors by dipping them in a dispersion of a conductive polymer. Now, they have demonstrated that such semiconducting silk fibres can be woven into an ’electrochemical’ transistor - one that employs an ionic solution, or electrolyte, to modify conductivity, as dopants are used in conventional semiconductors. 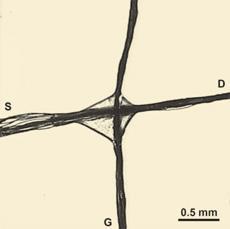 Microscopy image of a silk fibre-based electrochemical transistor device with source (S), drain (D), and gate (G) as indicated. A drop of electrolyte bridges the gap between the two fibres at the cross-junction

To make the silk transistor, the researchers crossed two silk fibres that had previously been dipped in a polymer known as PEDOT-S, and then added a drop of electrolyte at the junction. By applying a voltage across two ends of one fibre, which acted as the ’gate’ electrodes, they could control the current passing along the other fibre, whose ends acted as the ’source’ and ’drain’ electrodes. This is the same function performed by conventional transistors.

Jennifer Lewis, a materials scientist at the University of Illinois at Urbana-Champaign, US, thinks Ingan?s’s group has taken an ’important step’ towards electronics integrated with textiles, but notes there are limitations. ’The electrical properties [of silk fibres] suffer from having an insulating silk core,’ she explains. ’Another limitation is the need to "link" the junctions between the two fibres [with electrolyte], which would be cumbersome in a large-scale manufacturing process.’

Paul Calvert, an expert in flexible electronics at the University of Massachusetts in Dartmouth, US, agrees that the silk transistors have advantages and disadvantages. He points out that they operate at low voltages and can modify current with a factor of more than 100 - characteristics that compare well with other novel transistors. However, he says they are rather slow to operate, and are not very stretchable. The Link?ping researchers say their next step is to demonstrate the silk transistors in unconventional electronic devices. ’We want to integrate the structures into biological tissue,’ says Ingan?s.