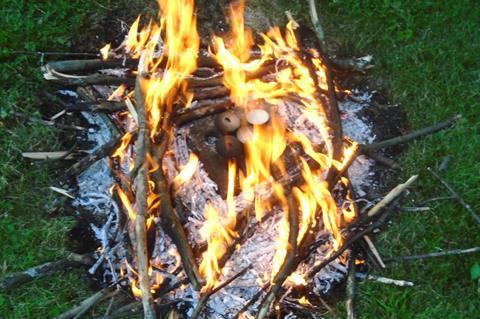 Chemists in the US have shown how ancient humans could have accidentally discovered a simple and easy way to make red ochre – one of the earliest pigments used by humans – by roasting lumps of a common brown mineral in campfires. The work offers fresh insight into red ochre’s prominence and ubiquity across human cultures.

Archaeological evidence points to humans using ochre pigments over 300,000 years ago, with uses ranging from body paint to art and ritual. Ochre is a mixture of sand, clay and iron oxide minerals, which give it hues ranging from yellow to red. Goethite produces brown ochre while haematite is responsible for red ochre. Both occur naturally, mainly in rocks and soils, so developing ways to manufacture haematite was not essential for humans to produce red ochre.

However, evidence suggests that vibrant red pigments were particularly sought after, possibly because they were seen as symbolising blood and life. Archaeologists had previously established goethite was intentionally being heated in fires or ground ovens to produce haematite around 100,000 years ago in the middle Stone Age.

Goethite is partially hydrated, while haematite is dehydrated. So when goethite is heated it loses water to become haematite. But until now scientists had only studied the colour conversion of synthetic goethite – which can be made in the lab – into haematite in precisely controlled lab furnaces. It suggested Stone Age people would have needed sophisticated ways to control the heating process. ‘I think it was assumed that laboratory results could be completely extrapolated to the real world,’ says Walter Bowyer at Hobart and William Smith Colleges in the US.

Intrigued, Bowyer and his team set out to replicate how Stone Age people could have made the pigments with just campfires. ‘We expected to confirm earlier results [with synthetic goethite] and found that natural goethite behaves very differently than synthetic,’ says Bowyer.

When the researchers heated natural and synthetic goethite in wood fires, they found that the natural mineral reacted more slowly and colour change was easily achieved between 300°C and 900°C and so it did not rely on precise temperature control.

They tested various heating methods that ancient people might have used including ceramic crucibles containing goethite powder, sandwiching powder between two stones and simply placing lumps of goethite in coals. It was this last technique that turned out to be the most effective.

‘We were very surprised,’ says Bowyer. ‘Any camper will tell you that when you put something in a wood fire, it comes out black,’ says Bowyer. But after heating, the lumps were remarkably clean of soot and ash that had contaminated the powder in other methods. Analyses of the samples with visible reflectance spectroscopy revealed that the brightness of the resulting red colours was the same from both fire and furnace heating.

‘The finding that heat treatment can readily produce red pigments through the heating of solid lumps of goethite directly in a fire without the need for precise temperature control is a valuable insight,’ says Andrew Zipkin, an archaeologist at Arizona State University.

Bowyer suggests that the ease of the method hints how ancient people could have stumbled upon it by accident and enabled knowledge of it to be quickly shared to others, offering insight into how the heat treatment of red ochre became widespread.

But Zipkin is cautious over whether the ease of the process would have necessarily aided the rapid dissemination of this technology. ‘It could just as easily have facilitated the repeated independent discovery of ochre heat treatment,’ he says.